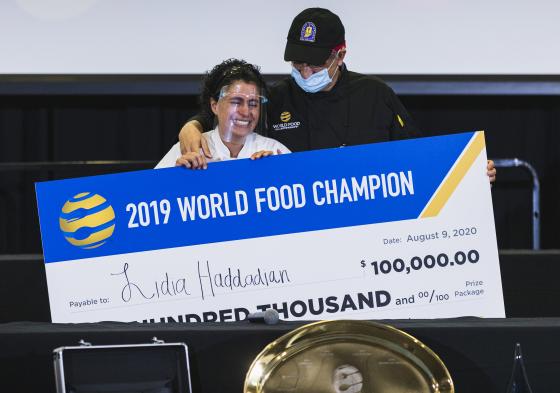 California’s Lidia Haddadian, known as the “Diamond Chef” in Food Sport, has finally claimed her World Food Champion title after defeating nine other talented category champions in a culinary gauntlet that occurred in Indianapolis, Indiana. The two-time category champion, who originally claimed her titles at the World Food Championships in 2018 and 2019, went home to Pasadena with her name engraved on the event’s golden platter and the $100,000 grand prize.

WFC is the largest culinary competition in the world, with hundreds of teams, both pro and amateur, competing annually at the event’s main event in Dallas. That event puts competitors through three challenges in each of ten categories, and then conducts a “Final Table” for the ten champions to see who wins the event’s ultimate title. That occurred in August of this year at Ivy Tech Community College in Indianapolis, where the new challenges were filmed for a docu series called “Final Table: Indy” that just aired on The Cooking Channel.

New to this year’s Final Table was three rounds of distinct judges, all experts in their culinary fields of focus. Their votes and scores eliminated champions through three challenges of Indiana-based dishes, until only one person was left standing.

During Round One, the ten contestants were tasked with making a Pork and Parisian Gnocchi dish using National Pork Board sourced cuts and Red Gold Tomatoes as a required ingredient.

The second challenge was recreating a complex Duck dish curated by Chef Greg Hardesty of Studio C and provided by Maple Leaf Farms. Only three finalists moved on to the final round, where they made their version of an Indiana-famous Sugar Cream Pie.

After several bumps in the road and a threatening point deduction, Lidia and her husband, Vahik, persisted and took home the $100,000 grand prize.

All the action can be found at this link, “Final Table: Indy”.

The Category Champions who competed in the WFC finale included:

Before achieving her biggest win, Haddadian was the first person in WFC’s history to ever be crowned champion in two different categories. She received her first WFC category champion title in 2018 while competing in the event’s Chicken division. A few months later, she went on to compete against the other nine category champions in New Orleans at the 7th annual Final Table event. Lidia placed sixth, and barely missed the cutoff to make it to Round Two.

But in 2019, when WFC replaced the Chicken category with Recipe, Lidia decided to take on a new challenge and ended up snagging a perfect 100 score, winning the World Recipe title, and taking home more than $10,000 in winnings leading her to the Final Table: Indy.

The ten competitors won their spot to compete at the “Final Table: Indy” event by emerging from WFC’s 2019 Main Event, where they beat out almost 500 teams to become the Champion of their category. Not only did they obtain a new culinary title to add to their repertoire, but each Champion also won a $10,000 grand prize. In August, they reconvened at Indy’s Ivy Tech Culinary Center to battle three more times, only this time there was a lot more money up for grabs.