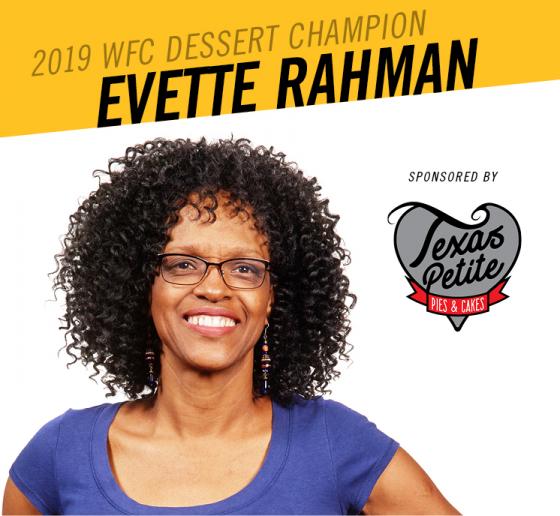 In Food Sport, a competitor winning a category title more than once is a rare occurrence. In fact, only a few cooks in the competition’s eight-year history have been able to accomplish a repeat. But no one has ever won a second title after taking a few years off. That’s what makes Rahman’s victory such a sweet one, including the fact that she took home $10,000 and earned a coveted seat at WFC’s Final Table Challenge for a shot at an additional $100,000 grand prize.

Rahman’s Orlando-based bakeshop, Sister Honey’s, is named after her mother who she gives credits for passing down the love for baking. Rahman remembers how mesmerized she was with all the goodies her mother would make. At Sister Honey's, everything in the bakery is made from scratch daily with premium ingredients to honor her mother’s legacy.

“My mother was my biggest inspiration. She taught me so much about preparing food,” shared Rahman.

Since her time spent whipping up dishes with her mother, Rahman has received multiple awards, been featured on the Food Network, in Hometown Cooking Cookbook by Family Circle and served as a panelist on the Crisco® Pie Tips Hotline. Additional achievements from this professional baker include being inducted into the Orlando Sentinel’s Culinary Hall of Fame, and placing Best in Show at American Pie Council (APA) National Pie Championships for three consecutive years. After winning the 2014 APA Championship, Rahman received her first Golden Ticket to compete at WFC where she would later go on to be crowned the 2016 World Dessert Champion.

As a seasoned Champion Chef, Rahman is no stranger to competitive cooking. However, WFC continues to become more challenging as it attracts some of the most impressive culinary talents; this year over 1,400 cooks from 42 states and 14 countries traveled to compete in the competition’s ten categories. Rahman, her sous chef and husband (Andy) devised a plan to jump ahead of the pack and snag another win at the world’s largest culinary competition.

“Our strategy this year was to not make recipes that involved complicated steps that would compromise the product and slow us down,” explained the 2019 World Dessert Champion.

Rahman and the other Dessert competitors were tasked with three sweet challenges in the Dessert category, which was presented by Texas Petite Pies. In the two opening rounds, Rahman was not only challenged to create a “Stuffed Cookie” using both a DoughEZ rolling pin and a non-stick mat but also had to bring her A-game by showcasing her culinary imagination and skill with a Signature dish.

“The Structured Round really threw us for a loop trying to make a stuffed cookie. We tried several times to develop a recipe for the cookie. We had no idea that it would score a perfect 100,” said Rahman.

With a perfect score on her Stuffed Cookie dish combined with her high marks for her Signature dish, Rahman advanced to the Top Ten Round of the competition. For the final challenge, Dessert competitors were tasked to infuse their dish with Texas Petite Pies Razzleberry Pie Filling. Rahman explained how her team devised a plan to incorporate this ingredient into their winning dish.

“Our final dish was based on a key lime pie, and we had to figure out a way to utilize the infusion ingredient,” said Rahman. “We were happy with our first recipe testing and decided to make that as our dish for the Top Ten Round.”

With an overall score of 94.44 out of 100, Rahman took home her second World Dessert Championship win.

For her next challenge, Evette will go up against the other nine WFC category champions at the event’s Final Table Challenge in Indianapolis set for May 2020. But for now, she is enjoying her success as she awaits her task for the $100,000 grand prize.

“This win gives validation for all our hard work, and we feel honored and supported,” expressed Rahman. “We don't know what to expect at the Final Table, but we are ready to try and conquer whatever comes our way.”