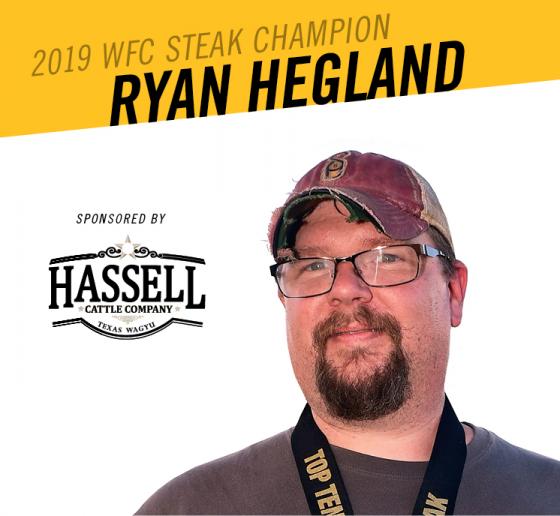 For most cooks, climbing the ranks in Food Sport can take years. But for one Minnesota Food Champ, it only took two appearances to claim a Category Championship title at the World Food Championships (WFC). As the newest World Invitational Steak Champion, Ryan Hegland’s $10,000 award-winning steak earned him a seat at the $100,000 Final Table Challenge this May.

The self-taught cook’s love for culinary was first sparked by watching his mother and grandmother working in the kitchen growing up. However, his culinary passion did not fully come to fruition until Hegland embarked on a journey to learn how to make his own sausage.

“Through the process of making the sausages, I bought my first smoker,” said Hegland. “As anyone who owns a smoker will tell you, once you start, you can't stop.”

From there, Hegland began cooking traditional barbecue meats and, eventually, formed his competitive team, Marburg Brothers BBQ. His team has been competing in the Kansas City Barbecue Society circuit for seven years. In 2016, Hegland made the transition to break away from just barbecue tournaments and started cooking in steak competitions, specifically through the Steak Cookoff Association (SCA).

“I cooked in my first SCA contest, thinking I knew how to cook a good steak. After finishing at the very tail end [of the competition], I took a year off. [During that time] I attended the judging class and studied other techniques to become more competitive,” explained Hegland.

After taking time off to perfect his craft, Hegland won a steak contest that qualified him for his first WFC appearance. His first impression of Food Sport was thrilling and inspired him to continue improving his cooking skills.

“My first year competing at WFC was in 2018 at Orange Beach, Alabama. It was a lot of fun, and I learned a lot. I didn't do as well as I had hoped, but as soon as it was over, we started practicing and preparing for the 2019 contest,” recalls Hegland.

At the 2019 Main Event this past October in Dallas, Hegland proved that practice makes perfect. He managed to wow both the SCA sanctioning and E.A.T.™ certified judges to take home the top prize in WFC’s Steak category, presented by Hassell Cattle Company. His winning dish, “Tomahawk Wagyu Ribeye with Elote and Seared Scallops” was infused with the event’s required ingredient, Challenge Butter, and received a score of 93.61.

Hegland is now preparing for his next food fight against the event’s other nine category champions this coming May in Indianapolis, Indiana. WFC’s Final Table Challenge will feature three rounds of destination-inspired competitions. The winner of the finale will be crowned the ultimate World Food Champion and receive the grand prize of $100,000. Hegland shared his thoughts going up against this field of talented cooks.

“I’m nervous but excited about going into the Final Table. I’m going up against some great chefs. I'll do my best to prepare, but I feel like it will be a completely different type of cooking competition that is outside my normal standard. I am looking forward to seeing what the challenges will be.”

The World Food Championships (WFC) is the highest stakes food competition in the world. This multi-day, live-event culinary competition showcases some of the world's best cooking masters competing for food, fame and fortune in ten categories. In 2019, more than 450 culinary teams from 11 countries and 42 American states competed in WFC’s Main Event. The Ten Category champs crowned will now face-off in the $100,000 challenge that will determine the overall World Food Champion at The Final Table: Indianapolis in August 2020.