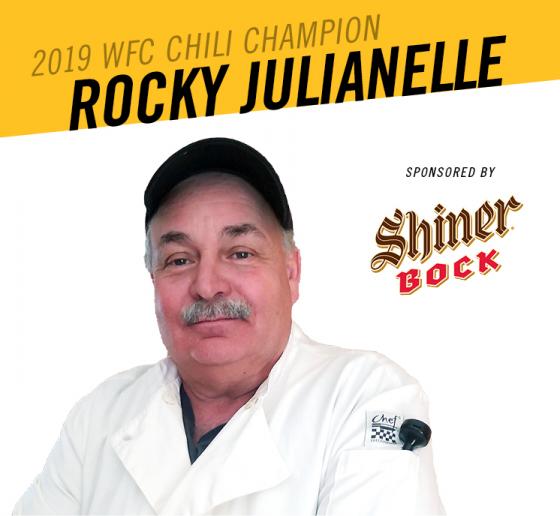 Julianelle, in his fourth year competing at WFC, managed to impress the event’s E.A.T.™ Certified judges and claim the top spot in the Chili category. However, this was no easy task as he competed against a field of the best chili cooks from around the globe including reigning World Food Champion herself, Jacqueline Seavey.

“I felt like I had a lot going against me. Not only was I competing against the reigning World Food Champion, but I’m not as young as some of these other competitors. I just turned 60 years old and can’t move as fast as some of these younger chefs. People don’t realize how physically demanding WFC is,” explained Julianelle.

In World Open Chili Championship, Julianelle had to navigate three challenges (Structured Build, Signature Dish and Infused Ingredient) to claim his first-place victory. For the Opening Round’s Structured Build challenge, Julianelle was tasked to create a Texas-Style Chili Con Carne dish. For his Signature Dish, he was able to let his imagination take the lead since WFC uses this entry as an opportunity for cooks to showcase their creativity by allowing them to craft any type of chili dish.

After the opening round scores were announced, Julianelle not only qualified for the final round of the competition but was leading the pack in first position. For WFC’s Top Ten Round, he and his fellow chili competitors were required to infuse any flavor of Shiner Beer, the category’s presenting sponsor, into their recipe. With a final score of 95.47, Julianelle’s final dish titled, “Texas Beef Chili with Cheese Straw Avocado Crema,” was enough to keep his first-place spot and claim him his first category title at WFC.

A contractor by trade, the self-taught cook has always had a culinary passion and competitive drive. And while he contributes his wife Paula as his main competitive cooking motivation, Julianelle grew up in a food-centric environment.

“In my 20s, I cooked in restaurants and catering, and I also come from a family of chefs. As an Italian family, food and holidays are very important to us. Food is a language all on its own.”

When asked about what strategy he took going into Dallas to try and secure his first category win, Julianelle broke down his process.

“I examined my past WFC dishes that were successful then I adapted the recipes. From there, it was about making sure we executed our entry perfectly. As I walked into the awards ceremony I told my wife, ‘if we can’t win with that then we can’t win,’” recalls Julainelle. “In some ways, I think the final dish turned out better than I thought.”

The self-taught cook and newly crowned champion is now preparing for WFC’s Final Table in Indianapolis in May 2020, where he will compete against the other nine category champions for a shot at the ultimate crown and a $100,000 grand prize.

“The money is great, but winning the Final Table would mean so much more than that. I’m going up against superb talent, and winning would be a grand achievement in my culinary career,” said Julianelle