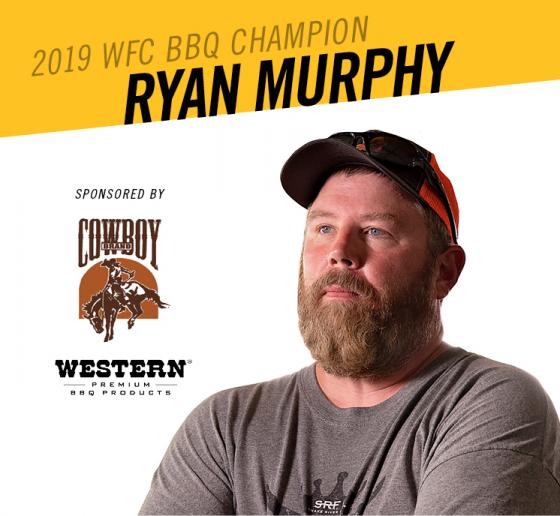 Murphy has been competing in barbecue contests since he and his wife filled in for his sister at a hometown competition. Once this pitmaster had a taste of Food Sport, there was no turning back. Since his first cooking contest in 2011, Murphy has competed in more than 200 culinary competitions and has been awarded more than 50 Grand Championships and Reserve Grand Championships combined.

“[Referring to his first competition] Although we didn't finish well that day, it was the catalyst that made us realize Food Sport was something we were interested in pursuing more seriously,” explained Murphy.

While Murphy has been competing in barbecue competitions for nearly a decade, this was his first year throwing his hat in the ring at WFC. With new rules and regulations, the Ultimate Food Fight provided advanced challenges for the seasoned pitmaster.

“We are used to cooking according to Kansas City Barbecue Society (KCBS) contests rules where everything is turned in a styrofoam turn-in container, and there isn't a lot of room for creativity,” explained Murphy. “We had to go outside of the box, literally, of our comfort zone for the E.A.T.™ presentations.”

As a newcomer, Murphy wasn’t sure what to expect at WFC. His strategy going into the competition was simple–– execute his recipe well. This not only paid off but exceeded the Kansas City native’s expectations.

“This was our first year participating, therefore we didn't have a lot of expectations. In fact, we actually didn't expect to advance to the Top Ten Round,” said Murphy. “Since we didn't plan to move on, we didn't bring the necessary equipment to cook in the finals. We had to borrow several pieces and received a lot of help from fellow competitors.”

With a little help from his WFC friends, Murphy wowed the judges in the Top Ten Round of the Barbecue category, which was co-presented by Cowboy Charcoal and Western Wood. His winning dish titled “Wagyu Steak Dinner” featured Hassel Cattle Company’s steak accompanied by mashed potatoes and grilled summer vegetable medley.

This victory came as quite a surprise for the rookie competitor. In fact, Murphy almost missed out on his crowning moment altogether.

“We didn't feel we had a good chance of winning since there were so many good competitors in our category,” said Murphy. “We actually almost left before the award ceremony because we had to be back in Kansas City for work the next day. We thought our dish turned out well, but we were worried it was too simple compared to some of the other entries we saw being turned in.”

To his surprise, Murphy came out on top and was awarded the title of this year’s World Barbecue Champion. Now, as he is still coming to terms with his victory, Murphy is prepping for his next food battle at WFC’s Final Table Challenge in Indianapolis. In May, he will compete in a three-round, destination-inspired challenge against WFC’s other nine category champions for a shot at the $100,000 grand prize and overall World Food Champion title.

“This win is a big accomplishment for us. Making it into the Top Ten Round in itself was huge for us considering the level of competition we faced,” reflected Murphy. “We are excited but very nervous to cook at The Final Table.”

The World Food Championships (WFC) is the highest stakes food competition in the world. This multi-day, live-event culinary competition showcases some of the world's best cooking masters competing for food, fame and fortune in ten categories. In 2019, a near-record number of 462 culinary teams from 11 countries and 42 American states competed in WFC’s Main Event. The Ten Category champs crowned will now face-off in the $100,000 challenge that will determine the overall World Food Champion at The Final Table: Indianapolis in August 2020.