There’s Something Fishy About This Political Consultant’s Side Hustle 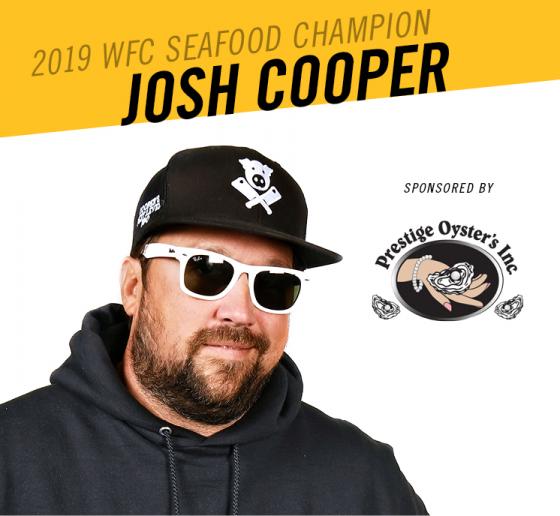 By day, Josh Cooper works as a Tahallasse-based political consultant. But in his spare time, Cooper is an aspiring culinary competitor — one who just cashed in on a liberal approach to an otherwise conservative nature.

In his professional life, Cooper advises conservative candidates on how to win elections. But by night, he’s been dabbling in culinary competitions since “getting hooked” with a friend’s competitive barbecue team. From there, the Florida cook fell in love with cooking and has dived headfirst into some of the biggest culinary competitions around.

“Our team went to Memphis in May, and that’s where I fell in love with Food Sport,” said Cooper. “From there, I immersed myself with the cooking culture and constantly watched YouTube cooking videos or read cookbooks to get new ideas for recipes.”

Ever since, Cooper has achieved great success by racking up numerous culinary accolades. His barbecue team has finished first place in three different categories at the Memphis in May Barbecue Cooking Contest, among receiving many other first-place wins. Cooper, himself, appeared on Season 8 of Fox’s Masterchef and has also been featured on the Food Network and Travel Channel. Additionally, Cooper serves as the culinary contributor for Influence Magazine.

Cooper was first introduced to WFC when he accepted an invitation from a friend to tag-a-long on a trip to see what Food Sport’s largest stage was all about.

“In 2016, a friend of mine, Chris Grove, was part of WFC’s Media Summit. He invited me to come and see what [WFC] was all about,” said Cooper. “Once I caught a glimpse of the food-fighting action, I knew I would be back to compete.”

His first-time competing at WFC, however, proved to be more intimidating than the Florida cook had expected and led to disappointing results.

“I competed for the first time in the Recipe category — we finished almost dead last,” recalls Cooper. “So with this year’s win, I joke we went from worst to first.”

For this year’s first challenge in the Opening Round of the Seafood Category, Cooper and the other competitors were challenged to create “Southwest Grilled Oysters” using oysters provided by Texas-based Prestige Oysters. For their next dish, cooks could whip up any Seafood dish they desired to showcase their culinary skills and creativity. The competitors’ scores from the first two dishes made up their Opening Round scores, which determined which ten cooks would move on to the next round of the Ultimate Food Fight.

Cooper’s score was good enough for him to advance into the Top Ten Round, but he found himself competing against some of WFC’s best competitors in his final challenge.

“After the Opening Round, we were tied with the reigning World Seafood Champion (Beau Smith) and the 2017 World Food Champion (Lisa Gwatney), who was leading the pack in first place,” said Cooper. “We were still optimistic, but we knew we had to execute well.”

For the final round of competition, Cooper and the other Seafood competitors had to infuse Hackleback Sturgeon Caviar (also known as American Sturgeon) provided by America’s Best Caviar into their dish. His dish, “Pan-Seared Scallops with Caviar Champagne Beurre Blanc,” jumped right out of the pack and moved Cooper into first place for his first championship victory at the Ultimate Food Fight.

When asked how he felt when his name was announced as the winner, Cooper shared his reaction.

“The best part about competing in Dallas is that my wife’s family is from there, so they got to be part of celebrating my win,” said Cooper. “I was in shock when it happened. I think my stepson was more excited than me. It’s a very humbling and exciting experience.”

While he enjoys his WFC victory, Cooper has been busy using his Champion status to become a spokesperson to promote the use of fresh seafood in the Gulf area year-round. He is also working on creating a line of seasonings and rubs to be released next year. Not to mention, preparing for WFC’s Final Table Challenge in Indianapolis in May 2020, where he will compete against the other nine category champions for a shot at the ultimate Food Sport crown and $100,000 grand prize.

“This experience has been absolutely incredible both personally and professionally,” said Cooper. “Going into the Final Table, our team is very confident without being cocky. We are used to cooking outside of our category, and I do have a lot of experience. With that being said, we also know we are going up against some extremely talented cooks.”

The World Food Championships (WFC) is the highest stakes food competition in the world. This multi-day, live-event culinary competition showcases some of the world's best cooking masters competing for food, fame and fortune in ten categories. In 2019, more than 450 culinary teams from 11 countries and 42 American states competed in WFC’s Main Event. The Ten Category champs crowned will now face-off in the $100,000 challenge that will determine the overall World Food Champion at The Final Table: Indianapolis in August 2020.