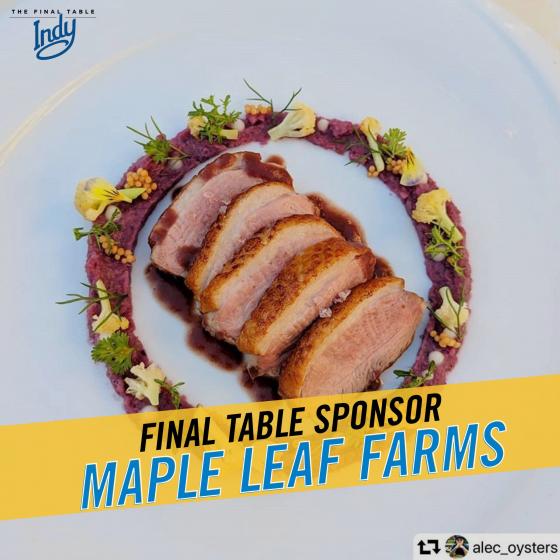 As Final Table:Indy draws near, the World Food Championships (WFC) and its presenting sponsors Visit Indy, Ivy Tech Culinary Center , Sysco and Team Indiana are thrilled to announce that Indiana based, Maple Leaf Farms. will serve as the product sponsor for Saturday evening’s tasting and Sunday’s second round of competition.

In the first round, the Champions will be making a Pork and Parisian Gnocchi dish, after which the field will be narrowed down to just five contestants.

“Connecting the premier talent in the world of food sports with Maple Leaf Farms premier duck products and sharing that experience with a national TV audience is just what we were hoping to accomplish.  It’s another shining example of showcasing the people, products, places and services making Indiana the “Culinary Crossroads of America,” said Larry Dickerson, Team Indiana and Culinary Crossroads spokesperson.

“Final Table: Indy,” which was scheduled for May but postponed due to COVID, will take place in Indianapolis at Ivy Tech Community College. Only three will make it to the final round, where they will have to recreate the Indiana-famous Sugar Cream Pie.