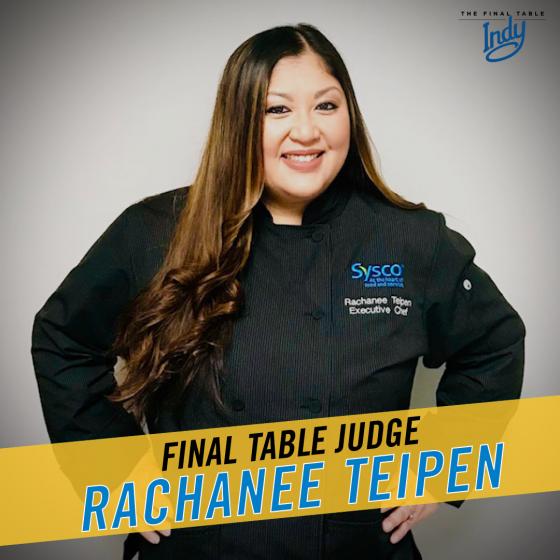 Chef Rachanee grew up in an adventurous food environment encompassing her Thai heritage. There was never any question that food would be her life’s passion. Chef Rachanee is the Culinary Consultant for Sysco Indianapolis. Sysco is the global leader in food service and as a culinary consultant for the Indianapolis region and surrounding cities, Rachanee is a valuable resource for customers providing them with her culinary support and expertise.

Rachanee is a graduate of the Cooking and Hospitality Institute of Chicago with a degree In Le Cordon Bleu Culinary Arts. She is currently a member of the International Caterers Association and a current member of the American Culinary Federation Greater Indianapolis Chapter.

Now, she will use her corporate culinary background to judge five championship-caliber dishes during the second challenge of the 8th Annual Final Table, which will occur on August 8th and 9th in Indianapolis.

During that second round, five of the champions who survived round one will be recreating a complex Duck dish curated by Chef Greg Hardesty of Studio C. Chef Rachanee and the round two-panel will decide which three contestants do the best during this process, so that they can continue on to the third and final round. At that point, the remaining champions will create their version of Indiana’s famous Sugar Cream Pie.


The ten Champions who will compete at the Final Table —which is hosted by Visit Indy and sponsored by Ivy Tech Culinary Center, Maple Leaf Farms, Sysco, Red Gold, The Pork Board, and Culinary Crossroads — include: