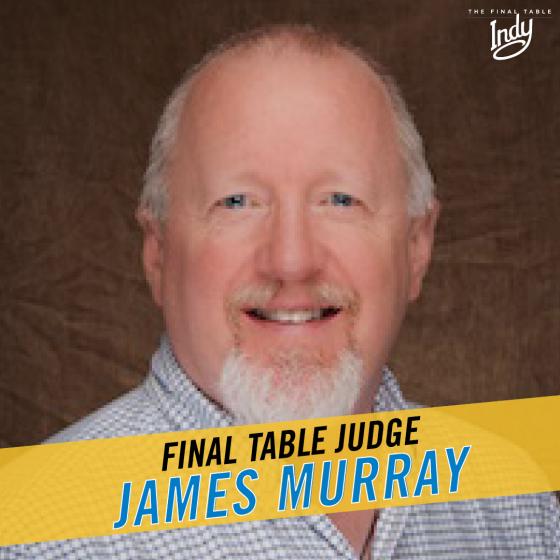 The World Food Championships (WFC) just announced that the National Pork Board will provide a key integration in the first round at the “Final Table: Indy” this August. They will also be providing a key judge to make sure that WFC’s ten champions have executed their dishes perfectly.

A World Certified Executive Chef, James Murray currently serves as the Executive Chef and National Channel Marketing and Innovation Manager for the National Pork Board. He supports pork producers through innovation, education, and promotional activities. In his role, Murray manages a broad range of strategic foodservice, retail and distribution accounts by assisting them in designing on-trend, pork-based menuing concepts, products, merchandising and promotions.

Murray has worked as a professional chef since graduating from Des Moines Area Community College Culinary Arts program in 1985 with high honors as an outstanding business graduate. He has a Bachelor’s in Art Education from the University of Northern Iowa and an Associates in Liberal Arts from North Iowa Area Community College. He has continued his professional education at the Culinary Institute of America, Texas A&M and Iowa State University.

Before joining the National Pork Board staff in 2012, Murray was the Senior Innovation Chef at Unilever Foodsolutions for 15 years and worked as a Corporate Chef and Sausage Evangelist for Johnsonville Sausage for four years. An active member of the American Culinary Federation, he has served as the Greater Des Moines chapter president and received the honors of chef of the year, president medallion and certified executive chef. Chef Murray has also received his World Certified Executive Chef certification through the World Association of Cooks Societies. He is a seasoned bbq competitor, KCBS judge, SCA judge and Certified Meat Cutter.

Now, Murray will use his specific pork knowledge and taste buds to help determine which of the ten champions made the best Parisian Gnocchi and Pork dish. Only five of the ten will move on.

The second challenge will be recreating a complex Duck dish curated by Chef Greg Hardesty of Studio C. Only three champions will move past this round to the third and final round, which involves making an iconic Indiana dish, the Sugar Cream Pie.

WFC will keep fans updated on which champs make it to the final round, but the ultimate winner will not be revealed until the newest “Final Table: Indy” show airs on the Cooking Channel this Fall.