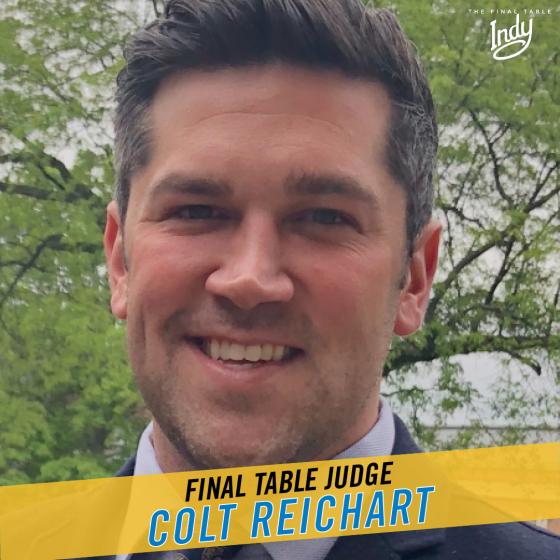 The World Food Championships (WFC) favorite and official tomato brand, Red Gold Tomatoes, will have a major presence at the 8th annual Final Table, which is being hosted in the company’s home state of Indiana. That presence will not only be products, but it will include one of the brand’s owners –– Colt Reichart.

Reichart, a fourth-generation owner, has worked for the family business his entire life.  Learning all things tomato, he has worked in production, maintenance, quality assurance and sales.  After he graduated from Purdue University with a Bachelor’s degree in Sales & Marketing Management, he began taking on roles such as Marketing Analyst, Regional Sales Manager, and New Media Manager until eventually taking on his current role as Director of Marketing. He also holds an official Organoleptic Taste Certification from the Wolf Group, receiving the highest score in the company…so his taste buds are on point for judging.

His latest role will include judging, as Reichart will join an esteemed panel of food critics during the Final Table’s first challenge on August 8th at Ivy Tech Culinary Center. This is when all ten champions will be making a Pork and Parisian Gnocchi dish, after which the field will be narrowed down to just five contestants.

“This is going to be a tense moment,” stated Mike McCloud, President of WFC. “Basically a contestant has a 50/50 chance of making it past this judging panel. And since they have to use Red Gold products during this process, it’s exciting to have Colt on board to help us determine who should move on to the second challenge.”

There are three challenges during Final Table: Indy, making it one of the toughest culinary gauntlets in Food Sport. Challenge two involves remastering a duck dish created by a local, well-known chef, and the final challenge requires three contestants to present their version of the iconic Sugar Cream Pie. In all three challenges, there will be a separate panel of judges, which is a first in WFC history.

Four generations of the Reichart family have been producing premium quality tomato products since 1942.  When the US entered WWII, the government asked citizens to step up and help the war effort and the call was answered.  Since then, Red Gold has become the largest privately-owned tomato processor in the nation with three state-of-the-art facilities in Elwood, Geneva, and Orestes, Indiana.  The company also boasts a million square foot distribution center in Alexandria and operates the subsidiary RG Transport trucking fleet in Elwood.   Red Gold partners with local family farms across Indiana, southern Michigan, and Northwest Ohio to sustainably produce premium quality canned tomatoes, ketchup, sauces, salsas, and juices for foodservice, private brands, export, co-pack and club channels of distribution.  The Red Gold family of consumer brands includes Red Gold, Redpack, Tuttorosso, and Sacramento.  Exceptional quality and operational excellence are the shared values that contributed to the employee-created mission statement: “To produce the freshest, best tasting tomato products in the world.”