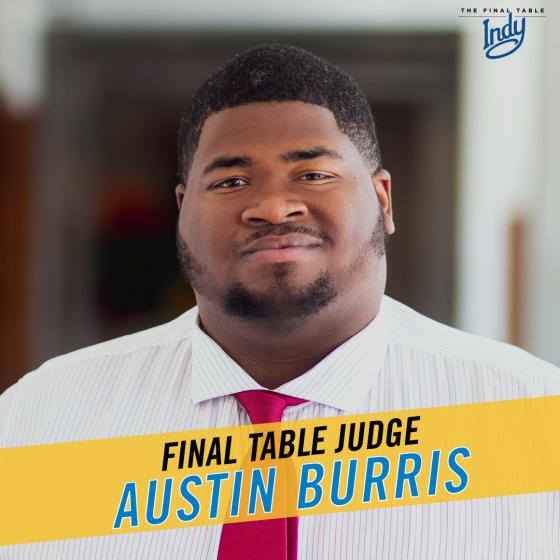 Product specialists. Food critics. Notable chefs. And now, a foodie publisher. The judges for the “Final Table: Indy” is a line up of experts like never before, making the pinnacle of Food Sport a gauntlet of culinary challenges like never before.

The most recent addition to the three-panel process in the new Final Table process will be EatHere co-founder, Austin Burris. An Indiana native, Burris is an avid foodie and whiskey enthusiast with a passion for the local food community. In 2016, he founded EatHere as an Indy-based food & dining content-sharing platform that enables users the ability to create, upload, and publish food-related media quickly and easily.

“Final Table: Indy,” which was scheduled for May but postponed due to COVID, will take place in Indianapolis at Ivy Tech Community College on August 8th and 9th. In the first round, the Champions will be making a Pork and Parisian Gnocchi dish, after which the field will be narrowed down to just five contestants. The second challenge will be recreating the complex Duck dish curated by Chef Greg Hardesty of Studio C. After this round, only three will move on to the final round.

In the third and final round, the three remaining Champions will have to impress a third panel of judges by creating their version of the Indiana-famous Sugar Cream Pie. This is where Burris will join a panel of local experts to help determine the next World Food Champion.