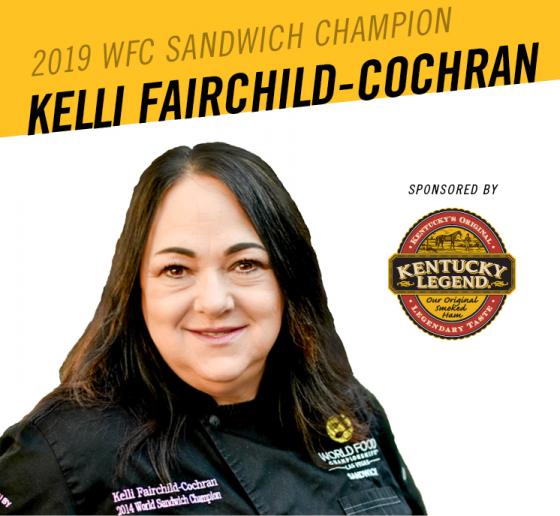 Kelli Fairchild-Cochran has proven that you can strike gold twice in the culinary world as she recently claimed her second world title at the World Food Championships (WFC). The self-taught Californian cook beat out a field of talented cooks and chefs to reclaim the World Sandwich Championship title, a $10,000 prize, and a seat at the $100,000 Final Table Challenge that will occur in May 2020.

It’s no secret that when it comes to simultaneously watching the children and cooking dinner, grandmas take the cake. The world’s largest Food Sport event, World Food Championships (WFC), brought back one of its fan-favorite ancillary events that featured four of its granny competitors in a grilling challenge with parent-themed curveballs.

The 8th annual World Food Championships (WFC) was filled with more food-fighting action than ever at its Dallas debut last month. One of its highlighted competitions involved a ninety-minute challenge placing four of barbecue’s award-winning lady pitmasters head-to-head in a no electricity battle to determine the ultimate Fire Woman. This smokin’ competition brought a highly praised cast to Dallas. The line-up for this fiery event included Jackie Milligan, Christina Fitzgerald, Robyn “Grill Girl” Lindars and Heather Sinyard, all decorated pitmasters, many of whom have appeared on Food Network.

The world’s largest Food Sport event, the World Food Championships (WFC), wrapped up its 8th annual competition at Reunion Tower Lawn in Dallas this past October. Even with the Main Event’s impressive $350,000 prize purse, WFC offers additional avenues for its competitors to win extra money through opportunities outside of its tournament, including its Super Qualifier Challenge sponsored by Springer Mountain Farms.

The largest culinary competition in the world made its Dallas debut this weekend and crowned ten new champions at the Reunion Tower Lawn. The World Food Championships (WFC) attracted to Texas more than 1,400 cooks from 42 states and 15 countries during its 8th annual search for the best culinary athletes and artisans from around the globe. Each champion won $10,000 and a seat at the event’s Final Table in the Spring of 2020, where they’ll compete in Indianapolis for the event’s $100,000 bonus prize.

The 8th Annual World Food Championships (WFC) is in full swing at the Reunion Tower Lawn in Dallas, Texas as the remaining Food Champs left in the competition are about to enter into the first day of the Top Ten rounds. Alongside the Main Event, one of WFC’s Food Sport sponsor, Springer Mountain Farms, will be giving Food Champs that were previously knocked out of the competition a chance redeem themselves in the Super Qualifier challenge. The 20 overall highest ranking competitors who did not make the Top Ten finals in their category will have a chance to compete for a 2020 Golden Ticket and a cash prize.

The World Food Championships (WFC) is dishing up new ways to reward competitors at its 8th annual event. Competitors, volunteers and brands will get a chance to be recognized on the big stage for their efforts and contributions during WFC.

When's the last time you had award-winning chefs serve you a custom dinner? How about a dinner that's earned over $500,000 in prize money? Probably never.

October 10, 2019
How Foodies Can Win At World Food Championships

With more than $350,000 up for grabs, there's little wonder why 1,500+ cooks are traveling into Dallas next week to compete at the 8th Annual World Food Championships (WFC). But how do regular foodies score a big win at this unique "Food Sport" event? Easy. They bring an appetite and download the event's official phone app.

The World Food Championships (WFC) will not only have a talented field of over 1,500 contestants competing for the $350,000 prize purse but will also have live music from across the nation to enhance the experience for food fans at its Main Event, which is set for Oct. 17-20 in Dallas, Texas.

The biggest competition in Food Sport just added another key partner to its roster. To help add to the excitement at the Main Event in Dallas, the World Food Championships (WFC) announced today that Humm will be debuting new innovative features at its 8th annual event to showcase Food Champs and Food Sport results throughout the week.