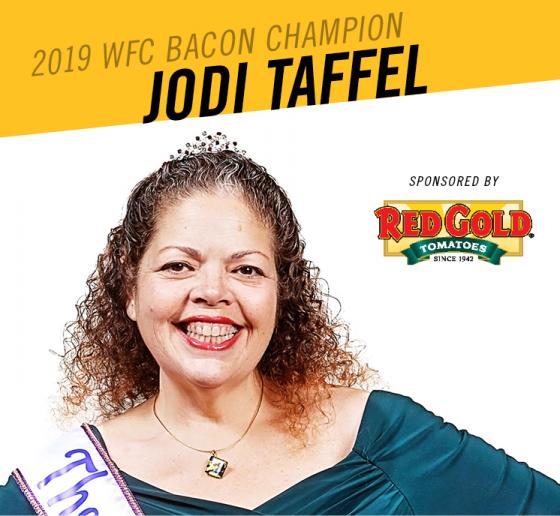 This self-taught Food Champ started her competitive culinary journey in 2010 when she entered her first tournament, The Grilled Cheese Invitational. Originally, Taffel threw her hat in the ring for fun, but by the end of the competition, she found herself returning home with a first-place win and a craving to compete again.

“How hard can it be?” said Taffel. “I did not expect to beat out over 250 other cooks my first time competing [at The Grilled Cheese Invitational]. From there, I caught the Food Sport bug.”

Now almost ten years later, Taffel has racked up some impressive accolades including placing first out of 7,327 entries at the Westminster Cheddar recipe contest and appearing on several food TV shows. Guy Fieri calls her The Princess of Pork, Alton Brown calls her The Porcine Queen, and World Food Championships’ CEO, Mike McCloud, calls her The Fabulous Bacon Babe.

Taffel set her eyes on the Bacon World Championship title in 2013 when she qualified through the Big Bite Bacon Fest with her winning dish that included four kinds of bacon and five different kinds of cheese. Before 2019, the closest she came to grabbing the WFC Bacon crown was in 2014 when she finished as the second runner up.

Throughout the years, Taffel has encouraged other cooks to take part in Food Sport, including her very own sister. The other Taffel sister, Cindy, took home the 2015 World Seafood Champion title as a rookie competitor. The Taffel sisters’ wins make them the only relatives in WFC history to both be crowned category champions.

“Cindy wasn’t interested in competing at all when I first told her about it,” explained Jodi Taffel. “Of course, after I convinced her to give it a shot, she ends up winning her entire category!”

Perhaps this was just the motivation the Fabulous Bacon Babe needed. Taffel (Jodi) confessed that she is super competitive, and there has always been a friendly competition between her and her sister.

“We are always there to support each other and help the other achieve her goals. I was her sous chef when she competed at the 2014 Final Table. It’s all in good fun, but at the end of the day I still like to win,” joked Taffel (Jodi).

After taking a brief hiatus from competing to serve on the 2017 WFC Ambassador Council, the Fabulous Bacon Babe made her return to the Ultimate Food Fight with one goal in mind: to become the Bacon World Champion.

“One day my dad jokingly asked me ‘how many macho credentials do you need?’” shared Taffel. “For me, there have always been three competitions in my mind that I wanted to win: Pillsbury Bake-Off®, Gilroy Garlic Festival Cook-Off and the World Food Championships. I had won the Gilroy and WFC became my Mount Everest.”

Finally climbing her way to the top, Taffel took home the 2019 Bacon World Championship title, which was presented by Red Gold Tomatoes, with her final dish titled “Bacon Steak on Sweet Corn and Jalapeño Nage with Bacon Caviar.”

While she enjoys celebrating her newest victory, Taffel has no plans to slow down anytime soon as she is set to launch her catering company next year. Not to mention, preparing for WFC’s Final Table Challenge in Indianapolis in May 2020, where she will compete against the other nine category champions for a shot at the ultimate Food Sport crown and $100,000 grand prize.

“It was so nice to see my Food Sport family congratulate me. I’ve had other competitors tell me they will be coming to Indy to cheer me on. It means so much to have their encouragement and support,” shared Taffel.

As anticipation builds between now and the spring event, Taffel shares her approach to going into the final battle.

“Shoot for the moon because if you don’t shoot, you won’t even be able to grab a star!”