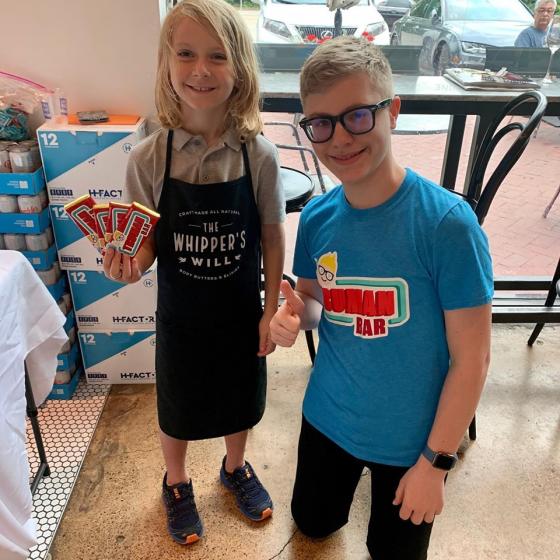 The world’s largest Food Sport event just announced a new opportunity for young entrepreneurs in the food business. This October, while over 1,500 cooks compete for a piece of the $350,000 prize purse during the five-day tournament, the World Food Championships (WFC) will be featuring five selected kid business owners and their companies at its Main Event this October.

For its 2019 debut in Dallas, WFC is providing a platform for young entrepreneurs who are possibly the next big winners in the food space. By carving out an opportunity for them in the new Kid & Company section of its event grid, WFC is preparing to help spur some new avenues for today's youth.

"At the heart of WFC, we are all about following your passion and realizing your dreams," commented Mike McCloud, president and CEO of WFC, which is now in its eighth year. "What better way to demonstrate that than by providing a platform for young entrepreneurs who are trying to make it in the food space?"

After some strategic research and networking, WFC found five compelling new business concepts in the Dallas/Texas area that were spawned and operated by children 16 years or younger. Each of them will be given prime space at WFC this year to show off their concepts and event sell their products to event attendees.

From chocolate bars to clothing, these kid companies provide quite a range of products. The Kid & Company line up includes:

About the company: Hand whipped, all-natural body butter. The Whipper’s Will is based on french skincare that Dorian’s mom used to make for him when he was a baby. This kid-entrepreneur learned to make these products as he got older. To make the fun, messy all-natural whip he uses essential oils, elixirs and organic oils.

About the company: Truman is a 14-year-old kid entrepreneur with his own lifestyle company for people his age. His main product is a very successful candy bar he sells in over 70 Dallas locations called Truman Bar. Truman Bar is a delicious milk chocolate bar that has a virtual golden ticket in the wrapper that can win epic prizes. Also, a portion of the sales goes to help Dallas homeless children at Vogel Alcove.

Truman Bar brings together great fun and high engagement, a kid entrepreneur and charity. Kids go crazy over these bars! He has been called his generation's Willy Wonka.

About the Company: Pash and Post is a fashion company designed to grow and change kids' self-expression. The line feature jackets, backpacks and gear with snaps that house “swag.” Swag, which is defined as a snap-backed accessory, allows for creative, craft fashion that changes on the snaps in an instant. The swag also lets kids “wear their heart on their sleeve” because several pieces give money to children’s charities and causes.

About the Business: This line of gluten-free gourmet barbecue sauce features three tasty flavors (Tangy, Lemon Pepper and Spicy) and is made with no high fructose corn syrup. Sienna Sauce was crowned the $25,000 grand prize winner of the "Side Hustle Showdown" on the Good Morning America show Strahan and Sara for her thriving sauce business.