Seven Ways to Get Into WFC for Free! 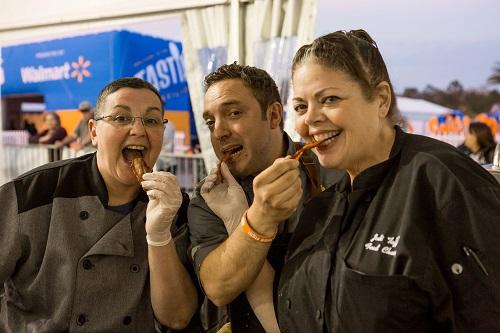 The largest culinary competition in the world, the World Food Championships (WFC), is just around the corner! This year's Main Event has a few different avenues for Food Sport fans to sink their teeth into for FREE this October at Reunion Tower Lawn!

This year’s WFC is on track to be the largest food fight to date, with over 1,500 cooks traveling from around the globe to battle it out for ten category titles and a shot at the event’s $350,000 prize purse. But better still, the WFC is a foodie’s dream come to true. In addition to catching all of the action happening in Kitchen Arena, WFC offers an array of special experiences, such as tastings in the Walmart Tasting Pavilion, free food demos on the Main Stage featuring Maximus (as seen on Gordon Ramsay’s “To Hell and Back”), and World Food Games–– which are all included with a General Admission ticket.

While WFC’s ticket pricing ($20 per adult at the gate) is easy to swallow, here are some special ways that motivated foodies can score a FREE entry into the Ultimate Food Fight, which runs for five full days in October:

Don’t meet any of the requirements above? No worries, you can take a bite out of this special discount.