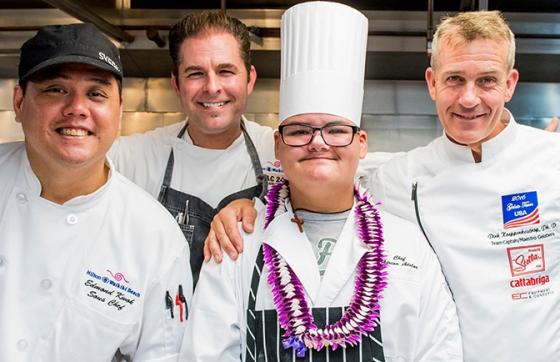 You would think defending his title as Seafood Champion would be the top priority for Chef James Aptakin at this year’s World Food Championships. And while protecting a reigning title is always a Food Champ’s goal, Aptakin has some bigger aspirations in mind for this year’s competition… to help make a 16-year-old’s culinary wish come true.

However, what really motivates this seasoned culinary pro can’t be found in the kitchen.

Chef Aptakin chooses to use his platform and passion for food to help better the lives of others. Knowing from personal experience how important it is to have someone believe in you, Chef Aptakin volunteers his time to mentor foster children and participate in various philanthropic projects. The chef connects with the children he mentors because he can relate to their situation. By the age of 4, he had already lived in 12 foster homes, experienced many hardships of abuse and was told he would never learn to read or write.

After overcoming many obstacles throughout his life and achieving the success he once never dreamed of, Chef Aptakin has made it his mission to empower others to do the same. “I try and share the importance of doing the right thing when no one is looking, working hard and giving someone the confidence to succeed. We are not a product of our circumstances or our past and just because someone tells you something, doesn’t mean it’s true,” explains Chef Aptakin. “When you feel like someone believes in you, it can make all the difference.”

Chef Aptakin plans to use the World Food Championships to help 16-year-old Adrian Avelar reach new heights in his culinary dreams. Chef Aptakin met Adrian through the Make-A-Wish foundation. Adrian, who has battled acute lymphoblastic leukemia for years, which is finally in remission, made a wish to become an Italian chef. Chef Aptakin and fellow WFC competitor Sous Chef Edmond Kwok gave Adrian a full master chef experience with an all-inclusive cooking class, personalized toque Blanche and a coat, along with a custom recipe book.

After seeing Adrian’s passion for food, Chef Aptakin decided to take it to the next level: he offered the ambitious young chef to experience Food Sport like never before. Adrian will be traveling to WFC to assist Chef Aptakin this year, along with Sous Chef Edmond Kwok and Team Hawaii during the competition. He will also be helping Chef Aptakin with live cooking demos for WFC attendees and lend a hand preparing the award-winning dishes for the Yacht Club Dinner Party.

“I want Adrian to experience what it’s like to be on the world’s largest food stage because it’s an experience like no other,” said Chef Aptakin, who was second overall at the event’s prestigious Final Table in 2016.

Chef Aptakin will also be sponsoring two students at WFC from the Kapi’olani Community Community College Culinary Arts Program. The culinary program held a competition among its students where the challenge winner took home two all-expenses-paid trips to compete in the Steak category.

“The most rewarding part of seeing the students go head-to-head was when they each promised to take the other competitor to WFC if they won,” said Chef James. “I can’t wait for myself, Team Hawaii, and the KCC Culinary students to bring the aloha spirit to Orange Beach.”

See the passion of more Food Champs like Chef Aptakin while enjoying the savory samples and food festivities at this year’s World Food Championships on Nov 8-12 at the Wharf in Orange Beach, Alabama. Click here to learn more about WFC and its lineup of special events.