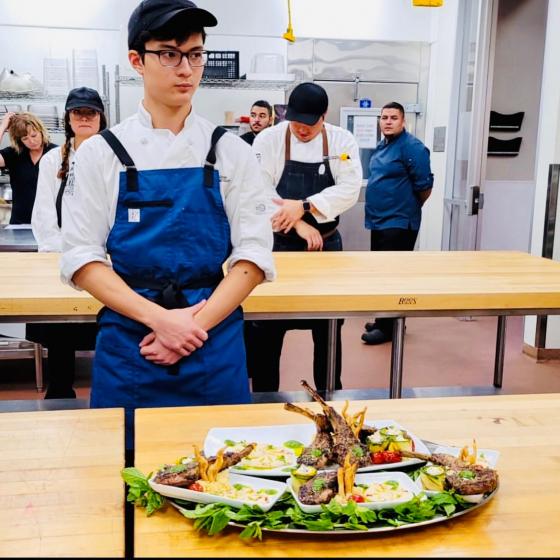 As the dust from a sizzling cookoff weekend settles, numerous local chefs from the Dallas area are now setting their sites on the biggest food fight of them all: the World Food Championships (WFC) at Fair Park in November.

In cooperations with its official higher education partner, WFC held a “last chance qualifier” exclusively for Dallas culinary teams to give them a chance to participate in one of WFC’s competitive categories: Bacon, Barbecue, Burger, Chef, Dessert, Recipe, Sandwich, Seafood, Soup and Steak.

Chefs from the region were tasked with creating their “Signature Dish” in a timed, live-cooking competition hosted at the Dallas College Culinary, Pastry and Hospitality Center. The throwdown was judged using WFC’s E.A.T.™ methodology by a panel composed of WFC and Dallas College Officials as well as Dallas Influencers – Trey Chapman of @TreysChowDown, Sereel Meadows of @Dallas_Discovered, and Leah Frazier of @TheLeahFrazier.

“Our partnership with Dallas College is one of the many ways we hope to discover new and rising culinary stars in the Texas region,” said Mike McCloud, President of WFC. “Giving them a chance to compete at the highest levels of Food Sport is not only exciting, but very rewarding for culinary students, staff and artisans to experience in the process.”

Due to a high number of participants, the Last Chance Qualifier was split into two rounds. The dishes to receive the highest scores per round earned a spot to compete at the 9th Annual Ultimate Food Fight, where they’ll now go head-to-head against the world’s best cooks for a chance at WFC’s $300,000 prize purse in November.

Round One Winners of The Last Chance Qualifier include:

Round Two Winners of The Last Chance Qualifier include:

You can see all of these chefs in action on Nov 5, 6 and 7 at Fair Park’s Centennial Hall. There will be over 400 teams competing in this year’s championship, which also features dozens of unique tasting opportunities for the public.

Want to root for your favorite local chef or take a bite out of the World Food Championships? WFC Event tickets are available at https://worldfoodchampionships.com/tickets.