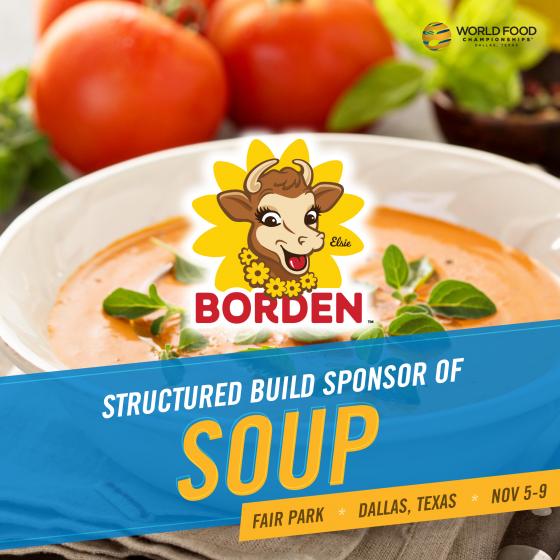 The 9th Annual World Food Championships (WFC), known as the “Ultimate Food Fight,” has recently unveiled key information on how its competitors will be whipping up award-winning dishes at the $300,000-prize-purse event in Dallas this November. In order to achieve success in the competition’s Soup division, chefs will be challenged to incorporate WFC’s newest sponsor, Borden Dairy.

Borden –– a 160+ year company in Dallas, Texas –– is an American dairy processor and distributor who’s famously recognized by their iconic mascot Elsie the Cow. Borden products not only deliver true happiness with its rich, creamy flavor but are also nutritious as its milk is packed with nine essential nutrients and comes only from cows not treated with rbST.

“We are excited to have Borden join the Food Sport family,” said Mike McCloud, President and CEO of WFC. “It’s a well-established and trusted brand who takes pride in the quality of dairy products they produce, and we believe that our competitors are going to enjoy using their products knowing it’s made with real, fresh dairy.”

As a Structured Build Sponsor of the World Soup Championship, Borden will be tasking up to 40 chefs and home cooks to infuse its Heavy Whipping Cream in the Soup competition’s first challenge –– Chowder.

Creating and executing the perfect Borden Dairy-infused Chowder is critical as it plays a heavy role in determining which 10 competitors will advance to WFC’s Final Round, where one chef/home cook will be crowned the first-ever World Soup Champion and earn a seat at the $100,000 Final Table Challenge.

“We’re glad to partner with WFC for this exciting competition that champions the comeback of foodservice and hospitality,” said Pat Boyle, President of Borden. “Borden’s high-quality, wholesome products are a staple in any delicious recipe, and we can’t wait to see what these contestants cook up.”

From sour cream and cottage cheese to butter and half & half, the Borden Dairy team will also be supplying several of its creamy products to WFC’s Pantry for all 1,500 competitors among 10 categories to use throughout the multi-day tournament. A complete list of Pantry products are available in WFC’s Competitor Packets, here.

Stay tuned for more partnership announcements about the upcoming Main Event, which is set to be held inside for the first time at Fair Park in Dallas, Nov. 5-9. Ticketing options for the foodie fest are available at worldfoodchampionships.com/tickets.

Founded in 1857 by Gail Borden, Jr., Borden is an iconic American brand that produces more than 35 wholesome and delicious products enjoyed by millions of people every day. Borden was the first company to develop a patent for the process of condensing milk, as well as the first company to use glass milk bottles. In 1936, Elsie became America’s favorite spokes-cow and was recognized in 2000 by AdAge as one of the top 10 advertising icons of the 20th century. Today, Borden is headquartered in Dallas and operates 14 milk processing plants and nearly 100 branches across the U.S. that produce and distribute nearly 500 million gallons of milk annually for customers in the grocery, mass market, club, food service, hospitality, school, and convenience store channels. The company’s People First culture has inspired decades of loyal tenure among hundreds of the 3,300 people Borden employs. In 2019, Borden landed the No. 16 spot on Forbes’ list of America’s Most Reputable Companies, highlighting the company’s well-earned trust amongst consumers. For more information, visit bordendairy.com.