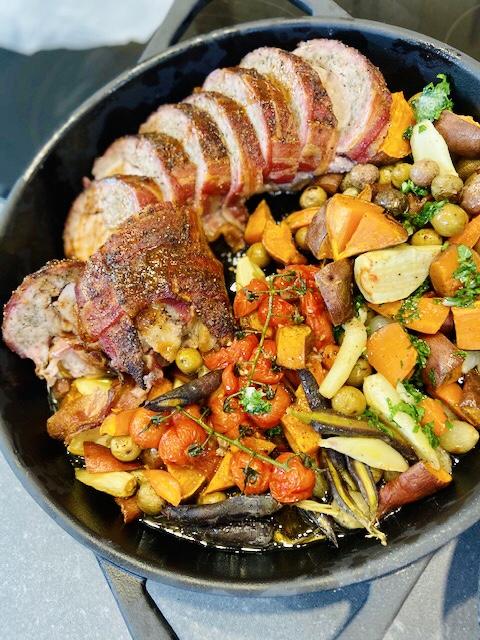 Pork lovers just scored a huge victory for holiday cooking thanks to a new recipe partnership between the World Food Championships (WFC) and National Pork Board (NPB).

This talented duo, with Chef Murray representing NPB, will use their experience and culinary knowledge to teach viewers how to cook three championship-caliber dishes that are achievable in any home kitchen.

For starters, Haddadian will walk through a tasty appetizer recipe that is sure to wow all your guests this holiday season. Called “Sweet’n Spicy Baby Back Taco Bites,” her recipe will feature layers of flavor that will captivate your senses. The uniquely textured spinach-herb tortilla shells are generously filled with sweet’n spicy-rubbed baby back ribs topped w/ fresh pico de gallo, drizzled with chipotle crema drizzle and sprinkled with cotija cheese.

Next, Chef Murray will give an overview on executing an oven-roasted pork tenderloin enrobed in housemade sausage and a stunning bacon weave. This elegant main course will be accompanied by Carolina-inspired Pig Dip and oven-roasted seasonal vegetables tossed in Pig Butter.

To wrap up the meal, Haddadian will turn to a pork-inspired dessert dish. “Maple Bacon Fudge Truffles,” as she calls it, will bring tons of sweet bacon flavor to a decadent fudge dish. Candied bacon and maple-infused white chocolate fudge beautifully unite, creating an indulgent fudge filling, gently covered with chocolate.

"It was my pleasure to team up with Lidia to create a menu that shows the great versatility of pork. We both had fun using recipes from around the globe that are achievable in a home kitchen," said Chef Murray.

Although she’s not a classically trained chef, Haddadian brings a special perspective and culinary talent to the table. She’s the only person who has won two World Category Champion titles in two different categories at the World Food Championships, which draws almost 500 teams a year and rewards more than $350,000 in cash and prizes annually.

Her victories were in the Chicken category (2018) and Recipe division (2019). Her first Final Table victory, which pits all category champions against one another for a $100,000 bonus, came in August of this year at the WFC finale. That event was featured in a TV special called “Final Table: Indy” that aired in October on Cooking Channel and the replay is available here.

“The Pork Board’s involvement in competition cooking, which we call Food Sport, has been a big boost for home cooks, chefs and pro teams throughout America,” said President and CEO of WFC Mike McCloud. “This collaboration of recipe ideation and sharing is just one of the things that will come out of this great partnership, and we’re excited to be working with NPB to help foodies and home cooks everywhere.”

Follow the National Pork Board and World Food Championships on Facebook and tune in on either page, Nov. 10 at 8 p.m. Central to catch these tasty holiday recipes.

About The National Pork Board

The National Pork Board has responsibility for Pork Checkoff-funded research, promotion and consumer information projects and for communicating with pork producers and the public. The Pork Checkoff funds national and state programs in consumer education and marketing, retail and foodservice marketing, export market promotion, production improvement, science and technology, swine health, pork safety, and environmental management and sustainability. For the past half century, the U.S. pork industry has delivered on its commitment to sustainable production and has made significant strides in reducing the environmental impact of pig farming. Through a legislative national Pork Checkoff, pork producers invest $0.40 for each $100 value of hogs sold. Importers of pork products contribute a like amount, based on a formula. For information on Checkoff-funded programs, pork producers can call the Pork Checkoff Service Center at (800) 456-7675 or visit www.pork.org.
« Back to News
Search All News SEARCH