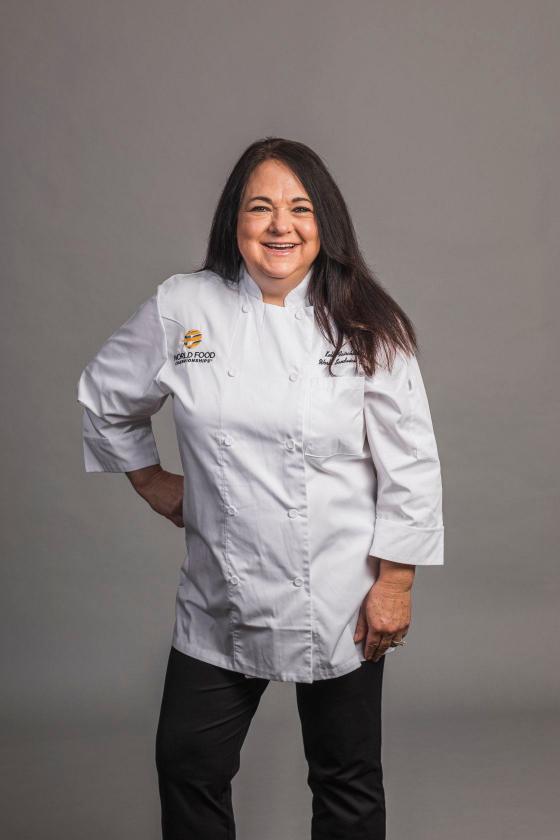 Two-time World Sandwich Champion Kelli Fairchild-Cochran knows how to stack up her winnings. In fact, she secured a top-five spot in the finale of the world’s largest Food Sport event to increase her total earnings to $12,000 this season. The “Final Table: Indy” culinary throwdown was held in Indianapolis in August and filmed for a special one-hour TV show that will be released in October on the Cooking Channel.

The event was hosted by the World Food Championships (WFC), Visit Indy, Ivy Tech Culinary Center and Culinary Crossroads. It featured ten Category Champions who had earned a seat during WFC’s Main Event last fall in Dallas. Kelli, who has earned national sandwich titles in 2019 and 2014, completed the tournament with a 4th place finish.

In the opening round, Kelli and the other champions were tasked with making a Pork and Parisian Gnocchi dish using Red Gold Tomatoes and pork cuts sourced from the National Pork Board.

After finishing the dish on time, Kelli and her team presented it to a panel of local pork experts including Chef James Murray from the National Pork Board. The judging panel used WFC’s propriety judging system, the E.A.T.™ Methodology (which stands for Execution, Appearance and Taste) to score each dish.

Kelli’s pork dish was titled Tomato and Cherry Braised Pork Shoulder. Her team was initially penalized two points for turning in her recipe late. But they overcame the deduction by scoring a 96.75 (out of 100), which was the highest score of all rounds in the event. That allowed her to complete round one in third place with a 94.75.

In Challenge Two, the remaining five champs had to recreate a delicate duck dish designed by Chef Greg Hardesty and using Maple Leaf Farms’ product. Kelli and her team executed the dish well and presented it to a panel of knowledge specific judges such as Terry Tucker, owner of Maple Leaf Farms.

From there, three finalists were awarded a spot in the last challenge, which involved a creative interpretation of the iconic Indiana Sugar Cream Pie.

WFC kept fans updated on results throughout the August 8th and 9th event, up until the final challenge in which all parties involved were required to sign non-disclosure agreements. “The Final Table: Indy” national TV show will air on the Cooking Channel on October 3rd, 2020. At that time, the new World Food Champion will be revealed during the show’s final sequence.