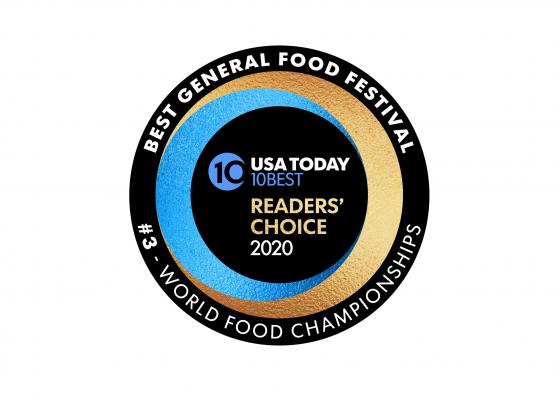 After its inaugural year in Dallas, the World Food Championships (WFC) has been named one of the Top 10 food events in the country by USA Today. As the only Texas-based food festival represented in the Top 10 list — as well as the only “Food Sport” event on the list — this award is not only a BIG honor for the organization, but it’s also a testament to the BIG passion and movement behind Food Sport, as well as the culinary scene in Dallas.

The nomination for the event came from a panel of relevant experts from USA Today and 10Best.com, but more specifically – the Director of Consumers at Eventbrite, Gareth Hornberger and CEO of Everfest Barry Kahn. The nominations were available to view on the 10Best Readers’ Choice Award contest page at 10Best.com, where anyone had the opportunity to cast a digital vote. Click here to see the full list of results.

“As one of the youngest festivals nominated and selected as a winner in this prestigious list, all of us at WFC are extremely proud and excited about this honor,” said Mike McCloud, President and CEO of WFC. “This award is a huge milestone for our event and the City of Dallas, as well as a testament to the power of Food Sport.”

Making the recognition possible was the fact that WFC’s 8th Annual Main Event had a BIG debut in Texas with many firsts. The fest side of WFC included a massive Walmart Tasting Pavilion, an Innovation Station for new products in the food space and a Kid & Co program that focused on enterprising young entrepreneurs in food. It also featured a new high-paced and energetic awards program, a show-stopping and Instagramable BBQ Ranch that fired up the taste buds, a special Grand Tasting that featured past champion recipes and much more! (Not to mention the 1400+ cooks and chefs from 42 states and 12 countries!)

“We want to thank everyone who voted for WFC in this process, especially the citizens of Dallas, the foodies who serve as our judges and volunteers, and certainly our sponsors and Food Champs from around the world,” McCloud stated.

Building off this momentum, WFC is already actively at work on a broad and diverse lineup of events for its 9th Annual Main Event, which is scheduled for Nov. 6-8. In fact, WFC has already revealed part of its foodie event line-up (here) as the event heads indoors for the first time at Fair Park this November. Tickets officially go on sale May 1st.

Stay up to date on all that's happening at WFC! From its $100,000 Final Table: Indianapolis Challenge in May, to the launch of its membership-program Food Sport Nation, WFC has an exciting slate of developments and events that promise to make 2020 the tastiest sporting event yet!

The World Food Championships (WFC) is the highest stakes food competition in the world. This multi-day, live event culinary competition showcases some of the world's best cooks who compete for food, fame and fortune in 10 categories (Bacon, Barbecue, Burger, Chef, Dessert, Recipe, Sandwich, Seafood, Soup and Steak). In 2019, more than 450 culinary teams from 11 countries and 42 American states competed in WFC’s Main Event. The 10 Category Champs crowned will now face-off in the $100,000 challenge that will determine the overall World Food Champion at The Final Table: Indianapolis in May 2020.

10Best.com says they strive to provide users with original, unbiased, and experiential travel content of top attractions, things to see and do, and restaurants for top destinations in the U.S. and around the world. The core of the site's uniqueness is its team of local travel experts: a well-traveled and well-educated group who are not only experts in their fields - and their cities - but discriminating in their tastes. These local experts live in the city they write about so the content is constantly updated. 10Best.com averages 5 million visitors per month. It was acquired by USA TODAY in January of 2013.

USA TODAY is a multi-platform news and information media company. Founded in 1982, USA TODAY's mission is to serve as a forum for better understanding and unity to help make the USA truly one nation. Through its unique visual storytelling, USA TODAY delivers high-quality and engaging content across print, digital, social and video platforms. An innovator of news and information, USA TODAY reflects the pulse of the nation and serves as the host of the American conversation — today, tomorrow and for decades to follow. USA TODAY, the nation's number one newspaper in print circulation with an average of more than 1.6 million daily, and USATODAY.com, an award-winning newspaper website launched in 1995, reach a combined 6.6 million readers daily. USA TODAY is a leader in mobile applications with more than 16 million downloads on mobile devices. USA TODAY is owned by Gannett Co., Inc. (NYSE: GCI).