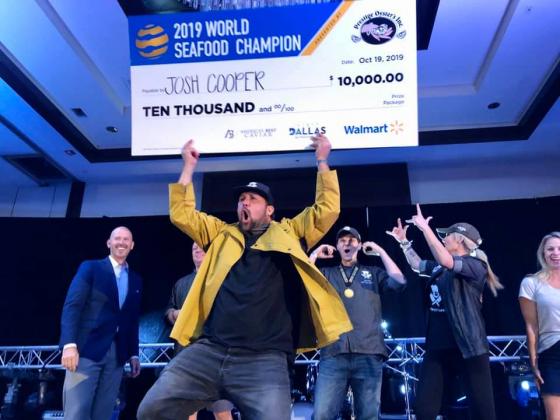 The largest culinary competition in the world made its Dallas debut this weekend and crowned ten new champions at the Reunion Tower Lawn. The World Food Championships (WFC) attracted to Texas more than 1,400 cooks from 42 states and 15 countries during its 8th annual search for the best culinary athletes and artisans from around the globe. Each champion won $10,000 and a seat at the event’s Final Table in the Spring of 2020, where they’ll compete in Indianapolis for the event’s $100,000 bonus prize.

The winners who emerged from the Main Event had to complete three rounds of challenges in the following categories: Barbecue, Bacon, Burger, Chef, Chili, Dessert, Recipe, Sandwich, Seafood and Steak. In this event, which kicked off the term Food Sport in 2012, the contestants come from all types of culinary backgrounds — from home cooks to trained chefs to professional cook teams.

“This was an epic culinary showdown,” commented Mike McCloud, president and CEO of WFC. “The amount of collective talent was the best we have ever seen, and it was evident in the results as we saw the tightest scores in our eight-year history. Dallas and the whole State of Texas rolled out the red carpet for our Food Champs, and we are truly excited about establishing roots for our Main Event in this extraordinary city.”

The following ten champions will be moving on to the Indianapolis Final Table in May:

With regards to the selection of Indianapolis as host, McCloud stated:

“Indianapolis is simply an exciting place to be in today’s culinary world and one of the premier hospitality cities in the country. The city and state have been on our radar over the past few years as we have continued to hear about and experience Indiana’s voice through their competitors, their fantastic products and the glowing reviews from national media.”

During McCloud’s Final Table announcement, he was joined on the World Food Championships stage by Indiana Lieutenant Governor Suzanne Crouch, who traveled to Dallas to support Team Indiana at the championships.

“Our capital city and the entire State of Indiana welcomes the World Food Championships Final Table and see this event as a great opportunity to showcase the ‘Culinary Crossroads of America’,” said Lt. Gov. Crouch.

“Indiana has played host to the largest sporting events in the world, and we take great pride in being the state where champions are crowned. Having the Final Table during the month of May will make it even more special for the competitors and guests as they experience the city and state during the hosting of the Indianapolis Grand Prix and lead up to Indianapolis 500.”

Indianapolis has been recognized by Zagat as one of the “30 Most Exciting Food Cities” and named by Condé Nast Traveler as one of 2018’s best cities for domestic travel.

More information about WFC’s 2019 champions and Final Table event will be released in the coming weeks.

About the WFC’s Final Table

Each of the 10 champions competing in Indianapolis will cook on-site during timed events to create a dish for the ultimate taste test. To see the drama of Final Table unfold, WFC encouraged fans to watch the recently releaseda two-part docu-series on the last Final Table event in New Orleans. Further details about the finale event will be announced in the coming weeks.