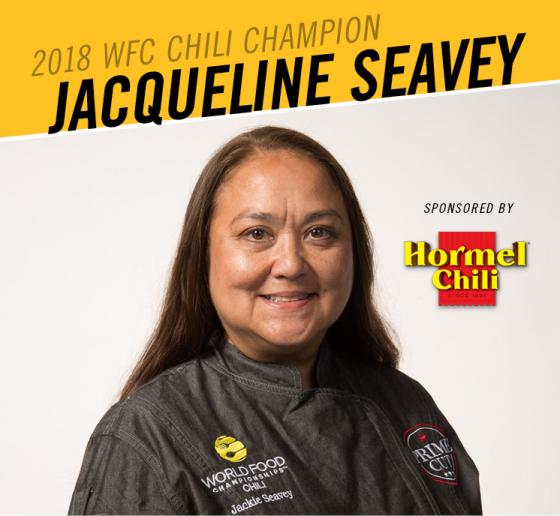 This was Jacqueline’s first time competing as a head cook at WFC. In previous years, she served as a sous chef in other categories such as Steak and Seafood.

The 2018 World Open Chili Champion has been working professionally in the culinary field for 25 years and currently manages kitchens in the casino industry.

“I grew up spending a lot of time helping my Thai mother in the kitchen, as well as watching my grandmother cook while visiting my grandparents’ Virginia farm-house in the foothills of the Appalachian mountains,” Jacqueline explained.“It was my grandmother who taught my mother, who eventually taught me, how to cook American cuisine when she came to the United States in 1963.”

Jacqueline’s biggest feat was going up against nine other talented cooks in the final round of competition, including two-time World Chili Champ, Liz Kraatz. When the smoke cleared in Kitchen Arena, this first-time head cook would be crowned the new World Open Chili Champion. Jacqueline’s overall score of 93.15834 landed the reigning champ in second place.

“During the Top Ten awards announcements, when it came down to the two of us, Liz Kraatz and myself, I really didn’t know what to think,” Jacqueline said. “When they called her name for second place, it took a few seconds for it to click in my brain, that I won. I was stunned and truly in shock!”

Jacqueline not only won a $10,000 check but earned a spot to compete for the $100,000 grand prize and overall title at WFC’s Final Table. As she prepares to take on the other nine WFC category champs in the ultimate test of skills, performance and creativity–– she reflects on what she loves most about competing in Food Sport.

“Participating in culinary competitions can be nerve-racking but it has always been very rewarding,” Jacqueline said. “Over the years, sometimes I’ve won, and sometimes I did not, but I’ve always walked away learning something.”

For the first time in WFC’s history, the Final Table will be a destination challenge that requires the champions to travel to a great American city and replicate dishes from the host city’s heritage to be judged by local celebrity chefs. Details on the Final Table process and location will be revealed at a later date.To review all the 2018 World Food Championships results, visit www.worldfoodchampionships.com/scores. For Food Sport updates, visit www.worldfoodchampionships.com and follow the World Food Championships on Twitter (@WorldFoodChamp), Facebook and Instagram (@WorldFoodChampionships).
« Back to News
Search All News SEARCH