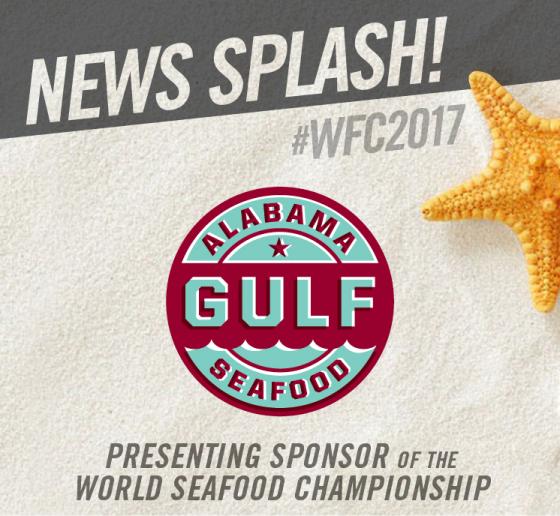 ORANGE BEACH, Ala. – (October 18, 2017) Competition cooks and chefs from around the world will be using Alabama Gulf Seafood in their attempt to reel in the largest payday in Food Sport history, scheduled for November 8-12 in Orange Beach, Alabama.

Almost 500 cook teams from 45 states and 20 countries are expected to compete in the 6th Annual World Food Championships, which relocated to The Wharf last year to conduct its 10 categories of cooking competitions and dole out more than $300,000 in cash and prizes.

Alabama Gulf Seafood will be the presenting sponsor of the World Seafood Championship, which will require several challenges from the contestants including an Oyster Rockefeller dish. The chefs and cooks will also have the opportunity to use shrimp and several other fresh seafood options from the Gulf as part of this year’s support from AGS.

“Our competitors love quality ingredients and new challenges,” said Mike McCloud, CEO of World Food Championships. “Having Alabama Gulf Seafood on board for our 6th Anniversary is an exciting moment not only for our seafood contestants, but for our entire field of chefs and home cooks. We will be finding numerous ways to utilize a variety of Gulf species that AGS plans on bringing to our event.”

Each category requires two builds in the opening round, a “Structured Dish” and “Signature Dish,” which are scored using the EAT (Execution, Appearance, Taste) methodology to determine the Top 10 finishers. Those Top 10 competitors move on to a final round, where they have to infuse a special ingredient to win the $10,000 prize purse and the 2017 World Seafood title. Last year’s top two winners in the tournament, including Hawaiian Chef and the 2016 World Seafood Champ James Aptakin, used Alabama Gulf Seafood as part of their recipe dishes.

The World Seafood Champion will go onto compete against the other nine category champions – Bacon, Barbecue, Burger, Chef, Chili, Dessert, Recipe, Steak and Sandwich – at WFC’s ultimate event, The Final Table. The winner of that competition, which will be held in April 2018, takes home $100,000 and the overall title, World Food Champion.

“To have Alabama Gulf Seafood represented in this competition is thrilling for us because of the event’s global reach,” commented Chris Blankenship, Commissioner of the Alabama Department of Conservation and Natural Resources and program administrator for Alabama Seafood Marketing Commission.  “We want culinary talent from around the world to see how incredible our seafood is, and WFC has opened a door for us to prove just that.”

AGS will be involved in other categories with a fresh pantry since seafood can be paired in numerous ways to complement other dishes.

Established by executive order signed in March of 2011, the Alabama Seafood Marketing Commission (ASMC) was created to help provide advice, oversight, management and encouragement to the marketing of Alabama seafood. Led by Chris Blankenship, commissioner of the Alabama Department of Conservation and Natural Resources and program administrator for Alabama Seafood Marketing Commission, the ASMC is comprised of volunteer members appointed by the Governor that includes fishermen, processors, charter boat operators, retailers, restaurant owners and others directly and indirectly related to the Alabama seafood industry.