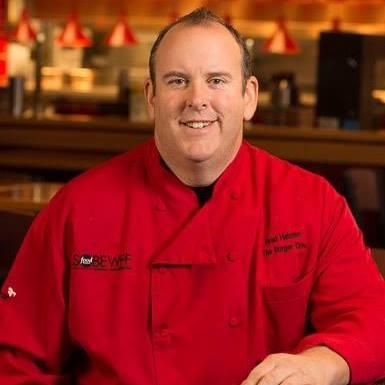 As the owner of the Burger Dive in Billings, MT, Brad Halsten had never even worked in a restaurant before opening the doors of his gourmet burger joint, but he has always been an avid griller and self-taught chef. But when the opportunity arose to compete in the World Food Championships held last November at The Wharf in Orange Beach, AL, Halsten jumped at the chance.

He explains, “As a competitive person who has been involved in sports or competing in some way, shape or form my whole life, the idea of competing against so many very talented chefs and cooks was very appealing. I love competing with our food against the very best.” The World Food Championships is perfect place for Halsten to feed his competitive urges because they are unique as the largest competition in Food Sports and also as the only event where professional chefs compete against home cooks and avid weekend warriors who participate in contests across the country and around the world.

Halsten qualified for the Burger division of the WFC by winning the Zoofari Burgers and Brews contest in Billings and then earned his way into the Top Ten by plowing through the first two rounds of competition by creating a burger based on the “structured build” theme of Polynesian burgers followed by a cook’s choice round. In the Top Ten, Halsten bested the rest by creating a delicious burger featuring the “infused ingredient” of bourbon.

For his efforts, Halsten received $10,000 and the title of World Burger Champion. When he heard his name announced as the category winner, Halsten was pumped. “It was absolutely amazing to hear the words ‘World Champion’ and then your name. I had a long football career that went from high school through four years of pro indoor ball, and I can’t tell you how many second places and barely lost in the last seconds championship games I was a part of. This felt like finally winning the big one. It was an incredible feeling.”

At the Final Table, the panel of judges included award-winning competitive chefs like Chris Lilly and Jason Stucki, celebrity chef/restaurateurs Bob Baumhower and Vic Vegas, and Katie Barreira, the Test Kitchen Director for Time, Inc. Food Studios. Faced with this distinguished group of knowledgeable judges as well the world champions in eight other food categories, Halsten recreated one of his burger recipes that had scored well in the preliminary rounds.

Unfortunately, he fell a bit short of the $100,000 grand prize, but Halsten did return to Montana with ten grand, the World Burger Champ title and some wonderful memories. “Hearing my family out in the crowd when it was announced we’d won and then coming off the stage, getting a huge hug from my daughter and standing there with all of them holding the big check and trophy was the best. It’s one of those once in a lifetime moments!”

At least until next year when he returns to the WFC to try again. “I’m already thinking of what to do differently next year as my goal is to win the World Burger Title again and go on to a much better performance at the Final Table.” Don’t bet against him.