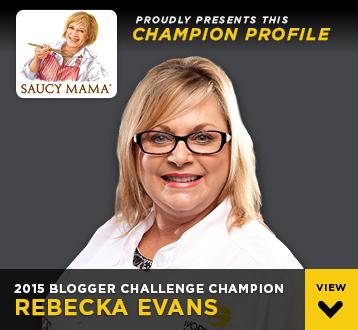 NASHVILLE – No one would have blamed Rebecka Evans for cooking while distracted at the Blogger Summit that was part of the 2015 World Food Championships.

After all, a new grandson had just entered her world (her first after four granddaughters), and Blogger Summit planners were a little worried that the new little guy who stole her heart might detour her trip to Florida to not only attend the event as a blogger, but also to compete in the Bacon World Championship.

But there she was, part of the cadre of online food writers from points around the globe who came to get an up-close look behind the scenes of Food Sport’s largest event.

Little did Rebecka know she would find herself on the stage at WFC’s opening event/welcome party accepting the first place award in WFC’s first-ever Blogger Summit Challenge.

The live-fire competition aspect of the Blogger Summit allowed many of the conference’s attendees to put their own cooking skills to the test, using the exact same Kenmore Kitchen Arena set-ups hundreds of Food Sport competitors would cook on in the coming days.

Evans’ winning recipe, a Sante Fe Filet with Saucy Mama Poblano Ranch Pan Sauce with Roasted Corn Skewers and Fried Green Tomato, featured the required ingredients of a 6 oz. Kansas City Steak filet and a Saucy Mama selection. But Evans also incorporated ingredients – tomatoes and fresh corn – she picked up along the way as she traveled with the Blogger Summit to Long and Scott Farms.

Admission to the Blogger Summit was limited. Those attending were required to submit a blog of their own to outline their experience in Food Sport and some of what led to their blogging career. Applicants were vetted to understand the readership/following they had established for their work. Evans noted in her application blog that she stumbled into blogging about six years ago when she happened to notice blog links on some of her friends’ Facebook pages.

She became intrigued by the idea that her passion for canning jams, jellies, edible flower petals and pickles as well as finding a place to share heirloom family recipes just might make for fun reading or at least a place to house the recipes.

Evans’ start in Food Sport reaches further past her interest in blogging. A classically trained opera singer, Evans worked for years with the Colorado Springs Choral Society on their central fundraiser, a Chef’s Gala. After two years of being the event’s organizer, Evans became a participant, cooking with international chefs and chefs from restaurants from around the world. Within a matter of days of the cooking experience in the Gala kitchens, Evans was hooked and had entered her first cooking competition.

Fast forward a few decades, five children, five grandkids, and scads of cooking competitions entered, Evans found herself not only gaining entry into the Blogging Summit, but also winning two competitions in 2015 that came with coveted Golden Tickets to compete in Seafood and Bacon at the World Food Championships, her first international competition. She decided to compete in the Bacon World Championship with her pre-qualification from Just A Pinch Recipes, an organization dedicated to supporting the home cook.

Evans brought her A-game to the Blogger Summit Challenge, creating a Steak recipe that combined the sizzle of jalapeño, a splash of lime and fresh garlic with the Saucy Mama Poblano Ranch dressing as the basis for the sauce for her pan seared steaks. She added slices of a traditional Southern Fried Green Tomato and a side of skewered inch-high medallions of grilled corn on the cob.

Like the World Food Championships category contenders, judges rated each Blogger’s entry based on the WFC’s proprietary EAT Methodology rating scale. In a sweeping win, Evans’ Steak dish was ranked by the judges at a solid 96.0, leaving her firmly in first place.

Along with a cash prize, her win at the Blogger Summit Challenge has pre-qualified Evans for competition in the 2016 World Food Championships, scheduled for November in Orange Beach, Alabama.

As to her success in the World Food Championships’ Bacon category, the first-time competitor came in at fourth place overall. That’s a pretty amazing feat for this self-described ‘award-winning home cook, food blogger, and avid food and nature photographer.’

Evans is reportedly already testing recipes for the 2016 World Food Championships and is a regular on the WFC Blogger Summit Facebook page.