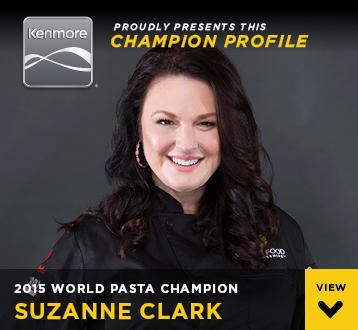 NASHVILLE – By day, Suzanne Clark is a sales and marketing representative for a laser repair company in Phoenix, but in every other moment, the reigning 2015 World Pasta Champion is balancing her five children with a burgeoning career as a food sport athlete.

She’s no stranger to the sport. As far back as 2010, Clark was one of 16 finalists in the Real Women of Philadelphia National Contest hosted by Paula Deen. Clark was called to perform her recipe live in Savannah, Georgia.

The appearance with Deen re-invigorated a childhood dream in which a young Clark would pretend to host cooking shows. Soon, Clark was racking up wins in food competitions, as well as sponsor support.

Her quest for the ultimate food fame began four years ago when, as the representative of Challenge Butter, Clark won the Challenge Butter Heritage Recipe contest, a pre-qualifying event for the World Food Championships.

Clark entered that global competition just two days before it began, and with barely any preparation time, she managed a fourth place category finish.  She would return in 2013 to capture second place in the same category (Recipe).

A confident Clark entered the Kenmore Kitchen Arena for the opening round knowing the first turn-in would require Challenge Butter as a featured ingredient. Luckily, Clark’s long-term relationship with Challenge products gave her years of experience with the product.. She chose a gingered mushroom base, using Maple Leaf Farms smoked duck in a Jasmine tea with cinnamon and star anise. She added toasted rye ramen noodles, which she seared with duck fat,Thai ginger, and smoked paprika. She topped the dish with a quail egg, enoki mushrooms, and green onion ribbons. The dish included  a handmade fortune cookie crafted from ramen noodles and Challenge Butter.

The second turn-in for the Opening Round was a Signature Dish. For this recipe, the competitors could turn to whatever dish they felt was their very best, within the category of competition. Clark reached into her recipe “Bible” for her Scallop Mousse-filled Tortelloni, which she studded with lobster, lemon shallots and both Butter and Cream Cheese from her Challenge Butter sponsor. She created a Thai Coconut Cream Sauce with Thai Red Curry. She served the pasta with buttered langostinos and a Thai Basil Gremolata.

In food sport, scores separating winners and losers are often fractions of points. Clark’s opening scores in both Structured and Signature Builds would firmly plant her in first place. In an unusual scoring profile, her top performing dishes for both turn-ins were rated identical: 96.750 out of a possible perfect 100.

As the top contender, Clark moved into the Top Ten round of competition, a reduced field of competitors with the 10 highest scores in the Pasta category. The Top Ten Round would also require competitors to incorporate Belbosco Truffles into the dish.

Clark had been developing a recipe that she believed would meet the challenge. She would create a unique ravioli that would contain two distinct pockets – one filled with duck confit from Maple Leaf Farms with porcini mushrooms and Manchego cheese, and one with a pate mousse with shaved truffles and Challenge Cream Cheese.  The double ravioli would call for two sauces. The first was a Cognac Butter Sauce with fresh truffles and the second, a drizzling of Blackberry Balsamic reduction. The garnish for the dish was a truffled Cheese Frico and Truffle Pearls from Belbosco Truffles.

In an interview during the competition Clark explained her pasta dough as containing nine egg yolks and the secret ingredient of truffle flour. “You won’t find this pasta anywhere else,” she laughed, “because I invented it!”

With an undergraduate degree from the Art Institute of Atlanta and a home filled with her murals and art, Clark believes her eye for art has translated into the artistry of presentation of her recipes.

As the finishers were announced on the main stage, Clark placed first, defending her Pasta championship from the year before. She collected a $10,000 check for winning her category, and secured the responsibility of representing Pasta in the Final Table Round.

The Pasta Category is being put on hiatus for 2016, and the champion has the option of selecting any competition category in 2016. With her experience in Recipe and Pasta, it will be interesting to see where she decides to throw her spatula.