From Doughnut Filler To Executive Chef to Bacon World Champion 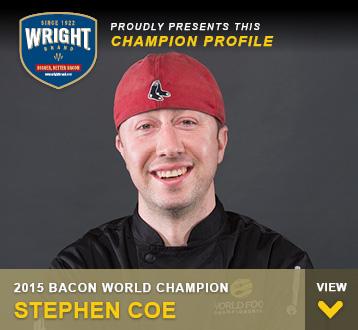 NASHVILLE — As the executive chef at a high-end hotel and spa, Stephen Coe often finds himself surrounded by the sounds of his activities: the clatter of utensils and pans, the buzz of the bees from which he sources local honey, the timbre of his own voice as he directs his high-octane kitchen.

This past November, Coe focused on another sound – the sizzle of bacon – that then allowed him to hear his name called as the 2015 Bacon World Champion, one of nine category champions crowned at the World Food Championships.

The Executive Chef of the Mirbeau Inn and Spa and Plymouth, Mass. resident swept the rankings in the crowd-favorite category, earning him the $10,000 category prize purse and entry into the next level of competition, The Final Table. There he would represent the Bacon category against the other top contenders representing the other eight categories of the international Food Sport event.

Coe is no stranger to the Food Sport world, placing third at the 2013 Bacon World Championship and fourth in 2014. In all he has honed his culinary skills on more than 100 worldwide stages and has appeared on Food Network’s Tyler Florence Recipe Contest. The 2015 World Food Championships would see him placing first in his category among the crowded field of experienced competitors, outdistancing the entire field of Bacon Competitors in each of the Opening Round turn-ins as well as the all-important Top 10 round. 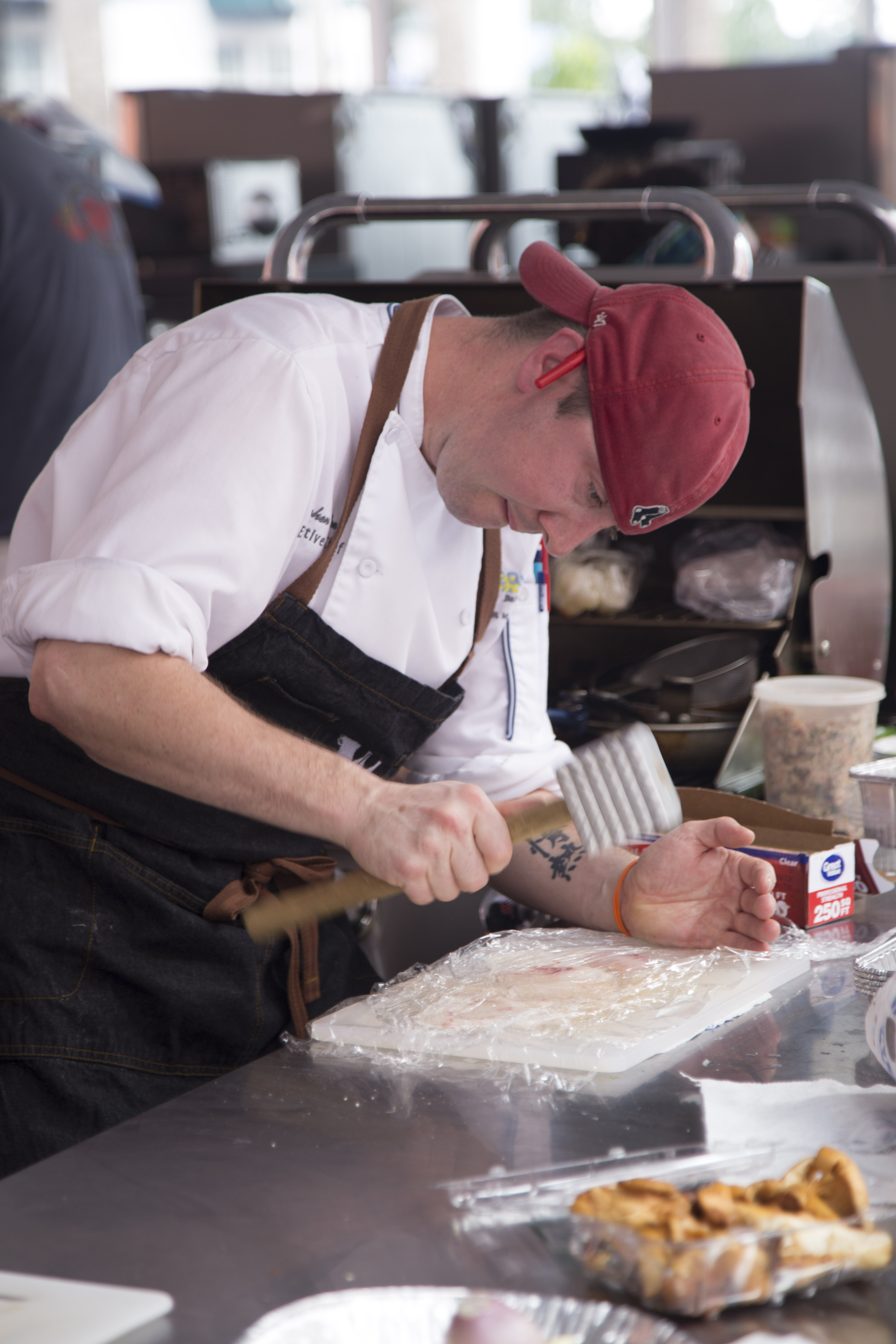 Every World Food Championships competitor is required to pre-qualify for competition by winning an approved food sport contest. Coe earned his wings from a successful submission in the Tyler Florence Wines Ultimate Recipe Pairings contest. His recipe won the coveted Golden Ticket to enter the Bacon category of competition in 2015.

Despite more than 15 years of professional experience as a chef, Coe contends that he was born into the culinary world, starting his career as a doughnut filler in his grandfather’s shop. Since then the culinary arts graduate of Johnson and Wales University also studied at the Institute Francais des Alpes in Annecy, France, earning his certificate in French food and language.

With more than 20 years of success in exclusive kitchens, including Bokx 109 American Prime in the Boston area, Coe has found time to advocate for sustainable agriculture and source his own honey and vegetables from local farms in the Plymouth area. He’s shared his talents with local food banks and food programs, including Meals on Wheels.

Without question his favorite haven and source of food inspiration has come from his own Hollow Tree Farm, a sanctuary of 22 acres of land with raised bed gardens, cranberry bogs and beehives from which he harvests 20 to 80 pounds of honey once or twice each year. There with his wife and young family, this talented chef has perfected recipes for everything from bee pollen smoothies to smoked honeycombs laden with his own honey product.

The international competition in Florida would require two recipes, each featuring Bacon, during the Opening Round. The first Turn-In was a Structured Round in which Coe revealed “The Smoke Show,” featuring a smoked pear, bacon and cranberry sacchetti, confit bacon with bacon jam and moustarda chive fondue with micro mizuna. The artfully arranged dish was filled with the rich colors of the bacon and fruits.

The judge’s scores left Coe in first place moving into the second turn-in. This was a Signature Dish – a bacon featured plate that the Coe would consider to be his very best recipe. Coe’s dish: Bacon and Eggs. Who could argue with a name like that?

But make no mistake, this is no ordinary plate of the breakfast favorite. An artfully stacked dish of bacon hash and quail eggs with bacon hollandaise, bacon-wrapped pork belly, the signature cranberry gastrique, flavored with a pickled red onion and topped with a crispy quail egg and dehydrated Brussels sprout. Again, Coe found himself ranked in first place and he became the competitor to beat in the next round of competitions where the field narrowed to the Top 10 highest scoring people in the Bacon category.

The Top 10 Round required that each competitor use Wright Brand Bacon in the recipe. Coe switched gears turning in a Fish, Chip and Chowder. This recipe combined shrimp, snapper and lobster with Bacon chanterelle and corn chowder. The title of the dish does not completely capture the confit bacon slab, smoked ham hock and wright bacon potato croquette, bacon wrapped-lobster mousse stuffed snapper, snapper and bacon chips, with béarnaise sauce. Once again, Coe was the top scoring contender and found himself standing on the Main Stage that night with a five-foot long check in the amount of $10,000 and the responsibility to represent his category, Bacon, at the next level of competition at the Final Table where the winners of each of the 9 categories of food sport would face off for a final round.

Coe did not win the Final Table round, coming in second to this year’s Champion Barbecue contender, but he did capture the title of Bacon World Champion for the coming year and has secured his place in the 2016 World Food Championships without having to pre-qualify.

Already back at work managing the busy restaurant and catering needs for the Mirbeau Inn and Spa, the creative Chef leaves great anticipation in the food sport arena about what will top his recipes from this past year.

“The competition was an absolute blast,” Coe said, adding that the rise in bacon’s popularity on the food scene is a great opportunity to find ways to infuse his “go-to” meat into more menu items at the Mirbeau Inn and Spa.
« Back to News
Search All News SEARCH