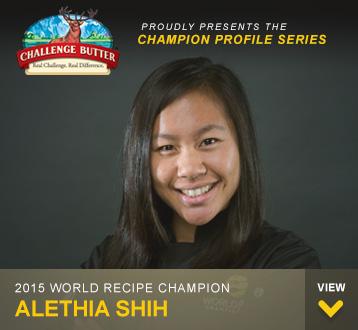 NASHVILLE – For such a young competitor, graduate student Alethia (Ala) Shih is already an odds-on favorite for the winner’s circle at Food Sport competitions.

Before sweeping the Top 10 competition for the 2015 World Food Championships’ Recipe (Fresh) Category, Shih turned the cartoon character Calvin into a fanciful Bundt cake to win two titles at the UCLA Edible Book Festival. The competition was a perfect match for the English major who is emphatic that writing — not cooking and baking — has been her first love.

Every story behind a Food Athlete is different. Shih’s kitchen interests began in that life-defining time as college graduation loomed and she was transitioning to graduate school. Her expertise in children’s literature, her sense of whimsy and her desire to be an “aspiring writer, food blogger and Disney Princess” blended perfectly with her winning recipes.

Searching for a way to imbue her students with a love of writing, Shih’s successful “Wallflour Girl” blog was born. Like many food blogs, “Wallflour Girl” features Shih’s favorite recipes with photos and directions for preparing them. But this storyteller takes her posts further with a style that makes readers imagine they have pulled up a barstool, cup of coffee in hand, to chat with a friend who’s puttering in her kitchen.

Since that first blog experience, Shih now finds that sharing with friends, family and her followers has helped to keep her grounded through graduate school stresses.

Shih earned the chance to compete in the 2015 World Food Championships in May of 2015 when she tied for first place at the California Strawberry Festival Berry Blast Off. That online recipe contest resulted in 90 contestants with only two finalists selected to compete at the Festival for a package of prizes that included the World Food Championships Golden Ticket. Shih made a Steamed Strawberry Coconut Poke Cake that featured a steamed cake base, rich with coconut and strawberries. While the judges were split evenly between the two contenders, the crowd favorite was Shih’s Poke Cake.

Fast forward a few months to the World Food Championships, which consisted of two separate turn-in requirements for the first round of Shih’s category — Recipe with a Fresh focus. The first, a structured build, required corn to be incorporated into the dish. Shih created a Japanese Soufflé Cheesecake with a corn-bourbon-cinnamon crème anglaise. Her second turn-in was her Signature dish, in which each competitor was allowed to submit the recipe they felt was their very best in keeping with the Fresh focus. Shih reached to the crowd favorite, her Steamed Chinese Coconut Poke Cake with Strawberry gelee. It proved enough to move her to the category’s Top 10 competition.

In her blog, “Wallflour Girl,” Shih describes the steps each of her family members took as they helped her continue a winning path at the World Food Championships. First, they temporarily canceled theme park plans in favor of sleep. Her Dad became the chief dishwasher, managing two suitcases full of dirty dishes, pots, pans and utensils. Her brother became the food critic as she worked in a rented condo to invent a recipe for the Top 10 competition that would feature Duda Celery required as an infused ingredient. She and her mom scoured stores for all new ingredients. Her parents canceled a planned cruise, and her brother rebooked their departure plane tickets.

With no recipe planned for a possible Top 10 competition round, Shih found herself combining favorite aspects of several recipes to concoct a Celery Butter Rum Inverted Layer Cake and Cheesecake. Experimenting in their vacation condo, Shih was delighted when her spice cake came out of the oven a success with the required ingredient of celery, and her own ideas of apples and carrots which she layered with creamy cheesecake with candied walnuts, and, yes, more celery bits.

Said Shih, “Who’d’a thunk, huh?” as she recalled discovering that this new take with celery would way outdo a carrot cake.

Soon, Shih, her signature smile beaming, learned she had placed first among the Top 10. Clutching a giant check for $10,000, she learned she would advance to the Final Table and a chance to win $100,000.

Entering Kenmore Kitchen Arena for the Final Table competition, her Dad reminded her to “Have fun!” Her Celery Butter Rum Cake and exhausted sous chef brother carried her through the final competition.

Although she did not win the ultimate competition for $100,000, Shih concluded that the Food Sport community is a wonderful circle of new-found friends. She found them to be supportive and encouraging of her newcomer status and were genuinely excited for her success.

She also notes that it took something of a village to get her to the World Food Championships with recipe tasters, friends her blogging community and even her students who followed her trek to Florida. She gave a shout out to all the volunteers, staff, judges, sponsors and even television crews who underpinned the event itself, but it was to her family that she is most appreciative. They became her team and cheerleaders, and, yep, she knows she owes them a real vacation.