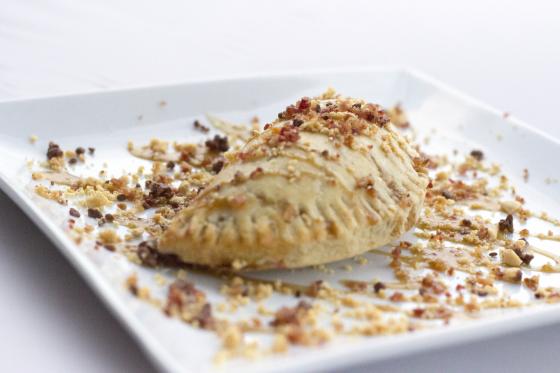 Bacon, bananas, whiskey, and yes, you guessed it, Goo Goo Clusters. That was the winning combination for Melissa Corbin at this month’s Music City Cookoff that took place as part of the Taste of Tennessee Festival at the Tennessee State Fair. Corbin’s risky combination of flavors paid off as her “Hunka Hunka Goo Goo-Love” earned he first place prize: a Golden Ticket to Vegas and a $1,000 cash prize.

Corbin, owner of Corbin in the Dell, LLC, a local food and social media consulting service, focuses on local flavors and local ingredients as her passion. Between now and November, she’ll be testing as many desserts as possible until she has the recipe that will make her the 2014 World Food Champion.

Seafood was king in the other competition at the Music City Cookoff. Ken Hess of Hoss’s BBQ & Catering and chef at the famed BBQ joint in Decatur, Ala., Big Bob Gibson Bar-B-Q, punched his ticket to Vegas with his palette-pleasing Seafood Paella. Hess’ winning dish involved more than just rice and seafood, though.  Hess used his homemade saffron tea, clam and mussel liquor, and shrimp and lobster broth to set his paella head of the rest and earning him top honors and a Golden Ticket.

Additional qualifiers for the World Food Championships included Lynn Smith and Todd Beaird in Dessert, and Carlos Garcia and Jernard Wells in Seafood. Best of luck to all winning competitors as they travel on to Vegas in November.

View the photo gallery from the Music City Cookoff on Facebook

View the compete scores for the Music City Cookoff below: