Champion chef: ‘Ingredients speak for themselves’ 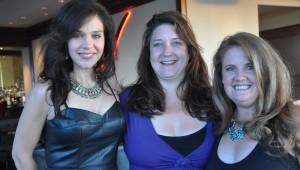 Champion chef: ‘Ingredients speak for themselves’

Attention to the competition was more than casual interest – the group included multiple participants from across the United States, including two category champions.

“You think we’d be at each other’s throats trying to win,” laughed Chef Christie Vanover, a Henderson resident. “But instead we’ve formed all these friendships. We have people here from Los Angeles, Chicago, South Carolina – they all came just to watch this.”

Vanover competed in the sandwich category in 2013 and will take part in the burger competition this year.

“It really hones your skills, because you have to find the balance between finding the complexity that’s really going to wow the judges (and) keeping things simple. (If) you mix too many ingredients to try to show off your skills, it just overwhelms everything.”

“You have to be very strategic when you’re putting together your dishes,” said Chef Jennifer Daskevic, who finished first in the 2013 sandwich competition.

“The judges have to love every single bite,” she said. “So we have to be very careful to focus on the taste and execution of the dish primarily.”

Chef Julie Hession from Henderson specializes in burgers, and says her family is offered a steady stream of her experiments leading up to a competition.

“Being in competition and knowing you’re up against some other top-notch cooks really makes you think about what’s on trend, what ingredients you could use and how you could combine them,” she said.

I always make sure I use really good quality ingredients…because I think the ingredients speak for themselves.

“I’m really right now into Asian food,” said Beth Peterson, 2013 winner of the pasta competition. “I’m loving all the ingredients you would find in all kinds of Asian food. I’m into Thia food right now, the spices and all the elements.”

The World Food Championships began in 2012 and will be hosted in Las Vegas for the third time in November. | iH