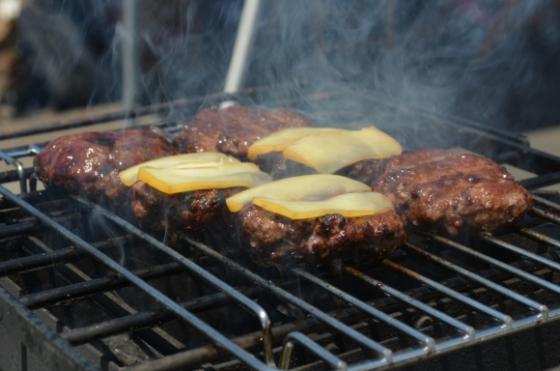 Just after mid-day the temperatures were hitting 86 degrees, but out front of Carddine Home Resort, electric skillets, grills — both coal and gas — were firing at much hotter temps.

About 15 backyard grillers and professional chefs from Vista to Los Angeles brought their best burger recipes to the second annual Burger Battle in the hopes of qualifying for a chance to compete in what’s being called the “Super Bowl” of food competitions in Las Vegas later this year.

And after the smoke had cleared, it was Kelly Shippey of Orange, Calif., who walked away with a new Bull gas grill and an all expense paid trip to Vegas for the World Burger Championships.

Don Richie, who helped to organize the event, said last year they had a good mix of “Average Joes” and professional chefs. This year, he added, they saw less of the backyard grillers but more teams and restaurant chefs.

Vista’s Rick McDonald, one of the self-described “Average Joes,” brought his sweet Thai chili burger recipe to the competition this year.

The full-time home inspector competed in last year’s event, which he said was a great experience.

“I’m just here representing the Average Joe. Most of these guys are professional chefs.” McDonald said. “I’ve always cooked. I love to grill.”

Though he said it would be nice to win the competition, he wanted to try and beat what he did last year. He placed seventh or eighth, he said, after presenting a California Buffalo burger to the judges.

Mike McCloud, president and co-founder of the World Food Championships said that because of the amount of food competitions popping up around the world and the U.S. that it was time the food sport be legitimized.

“And like any great sport, it needed a Super Bowl moment,” he said.

That event will culminate over a weekend beginning Nov. 13 when teams compete for a series of food cook offs, including the World Burger Championship, which boasts a $25,000 grand prize.

Several qualifying burger battles have been going on around the country to find the contestants for the championship.

McCloud said he’s been blown away by the creativity and variety of burgers he’s seen in each of the battles.

“You would think, in San Diego, or Scottsdale, or San Jose, you would get a Southwest burger — we’re getting everything from a Bourbon burger to a candied bacon burger to a seafood burger — we’re seeing all kinds of variety and it just shows how creative home cooks, and even competitive cooks, are getting with their pallets and with their passion.”

Each category receives a score of one to 10, McCloud said. All of the numbers, he added, are then placed into a computer, weighted with the highs and lows thrown out to achieve the “pure” score.

David Powell and Sebastian Alvarez with Pure Burger in Carlsbad made a strong showing with their first appearance in the competition, finishing seventh. McDonald earned twelfth place.