Addition Made to the Murphysburo Barbecue Competition 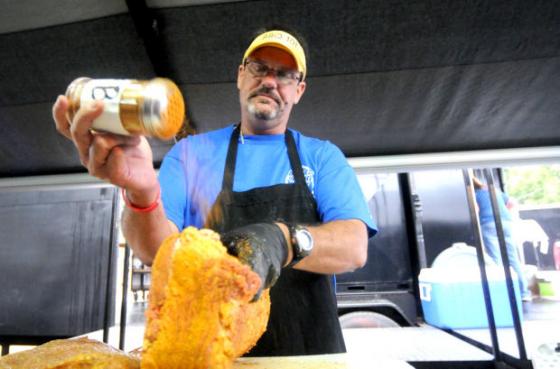 MURPHYSBORO -- A new addition will be featured at the 27th Annual Murphysboro Barbecue Cook-off this September.

The World Food Championships announced Tuesday its Super Regional qualifying event, the Southern Illinois Showdown, will happen at the Praise the Lard Barbecue Cook-off on Sept. 19-20.

The Southern Illinois Showdown will feature as many as 60 home cooks, chefs and restaurateurs facing off in one of the three culinary competitions -- bacon, sandwich and seafood. Contestants will be forced to compete against nature, a clock and a field of many talented cooks.

“The possibility of our next champion coming from the Murphysboro area is just as likely as someone coming to us from a designated culinary city.”

Murphysboro Mayor Will Stephens said he is pleased with the growth of the cook-off and most of it has to do with the hard work of World Champion pitmaster Mike Mills of 17th Street Barbecue and his daughter Amy Mills.

He said his event will showcase his city on the national stage.

“Anything that puts Murphysboro in the national spotlight, I am in total support of,” Stephens said.

He said the addition of the Southern Illinois Showdown will only add to the hype of competition which takes over Murphysboro in September.

“The cook-off takes over half the town,” Stephens said. “We make sure when people to town, it is really a downtown and in-town event.”

Registration for the Southern Illinois Showdown will open soon at www.worldfoodchampionships.com/super-regionals.

The Praise the Lard Murphysboro Barbecue Cook-Off takes place every third weekend of September in downtown Murphysboro in the southwest corner of Illinois.

For more than 25 years, it has become a cornerstone pilgrimage in the barbecue circuit. The dual-sanctioned event is equipped with both Memphis Barbecue Network and Kansas City Barbecue Society certified judges reviewing entries for chicken, fish, wings, shoulder, ribs, brisket and whole hog. Occupying four city blocks, the three day competition has a $25,000 grand prize and the honor of being awarded the title of top hog.