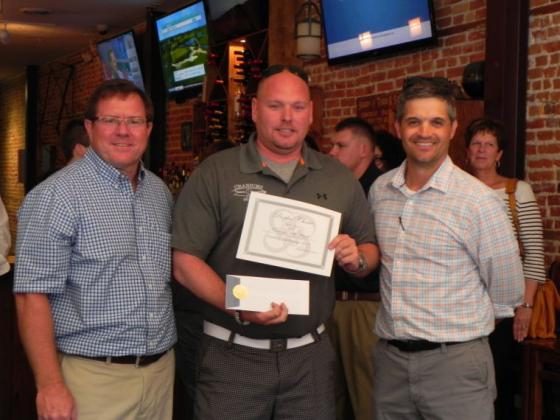 CAMBRIDGE — Craniums at the Beach, a restaurant planned to open here later this summer, will be participating in the seafood division of the 2014 World Food Championships in Las Vegas.

Craniums earned an entry in the World Food Championships by winning the Best of Show People’s Choice during the 10th annual Taste of Cambridge, held Saturday, July 12.

With all the votes counted by Cambridge Main Street, organizer of the Taste of Cambridge, the award was presented Thursday afternoon to Rik Richards of Craniums at the Beach during a brief People’s Choice awards presentation at Jimmie and Sook’s restaurant.

Craniums earned the Best in Show for its crab nachos, with 43 percent of the vote, winning by a 30 percentage point margin. Voting was by the 800 ticket-holders who were able to taste the entries in the Taste of Cambridge.

The crab nachos are actually from the menu of Richards’ John Steven Ltd., a restaurant Richards owns and operates at Baltimore’s Fells Point.

Richards’ first career was coaching football, and his first restaurant is Richard Craniums Bar and Grill in Green Bay, Wis., inspiration for this new restaurant to be located in Cambridge.

Richards said he recently bought a home in Madison and now divides his time between Baltimore and Dorchester County.

Richards said the crab nachos are the creation of his executive chef, Thomas Friend Jr. He expects he and Friend will make the trip to Las Vegas in November to compete in the World Food Championships. “I don’t want to pass it up,” he said.

The Taste of Cambridge was provided with the prize of the invitation to the World Food Championships because organizers were looking for competitors in the seafood division, one of two new divisions added to the competition, along with pasta. Returning categories for competition are barbecue, chili, sandwich, burger, dessert and bacon, as well as a recipe competition that has a cheese theme this year.

The World Food Championships will be taped for a TV series to appear on the FYI Channel. There will be 500 competitors vying for $300,000 in prizes.

The crab nachos also earned Craniums a People’s Choice for Best Crab Specialty by a Newcomer, with 76 percent of the vote.

Richards said the crab nachos were made from fresh ingredients, including local crab meat, with large, freshly made tortilla chips and house-made pico de gallo.

“Our plan is to keep everything local,” he said.

The crab nachos are a success because, Richards said, each tortilla chip is laid flat and covered with crab and pico de gallo.