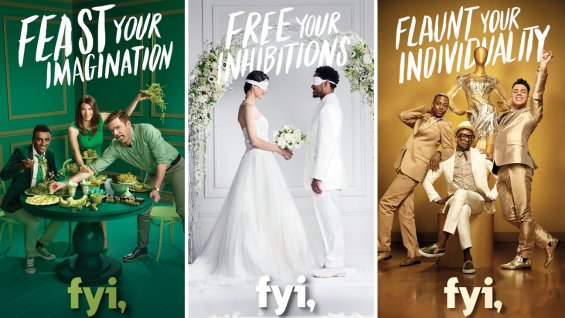 With its July 8 launch date fast approaching, A+E Networks is putting the finishing touches on Bio rebrand FYI. The new cable network is rolling out five original series within the first week -- and another two that month.

Ahead of the debut, The Hollywood Reporter has a first look at key art from five of the new shows and a promotional reel showing off the first series from the lifestyle network aimed and web-savvy viewers.

“Reflecting FYI’s mission of inspiring personal creativity across all aspects of viewers’ lives, the network will premiere with an authentic slate of series that embrace FYI’s adventurous, personalized and non-prescriptive approach to programming,” says FYI and LMN president Jana Bennett. "Viewers will see a taste of everything FYI has to offer with a range of stories and experiences that reflect how people actually live their lives today, not defined by just one passion or interest.”

Key art for the new shows reveals a slew of personalized takes on the brand acronym -- originally described as "for your inspiration" or "for your innovation" -- including "feast your imagination," "free your inhibitions" and "flaunt your individuality."

FYI's first year out of the gate will include an aggressive slate. The network has been beefing up a thus-far exclusively unscripted roster, recently adding cooking competition Midnight Feast and ordering several pilots.

Watch the first promotional reel for FYI below.