Well, it is already time to select those who will compete again this year and the first stop is in Indianapolis at the Art Institute of Indianapolis- The International Culinary School. Students will compete for a ‘Golden Ticket’ .

The Art Institute of Indianapolis has ten culinary students prepping and sharpening their knives for a 2014 World Food Championships qualification competition. On March 14, these ten students will walk into a culinary kitchen at The International Culinary School at The Art Institute to compete for a golden ticket which reserves their spot at the Championships in Las Vegas during November 12 through 18.

The qualification competition begins with a mystery basket. Each competitor will have to dig deep into their chef coat pocket of creativity to create a main entrée and a side dish with the surprise ingredients. 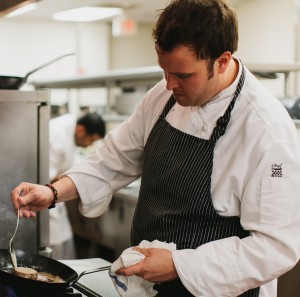 Ben Vaughn, emcee for the Championships who previously had his own show, “Health Inspectors” on Food Network, will be one of three guest judges and will award the golden ticket. For more information on Vaughn or the 2014 World Food Championship, visitwww.worldfoodchampionships.com.