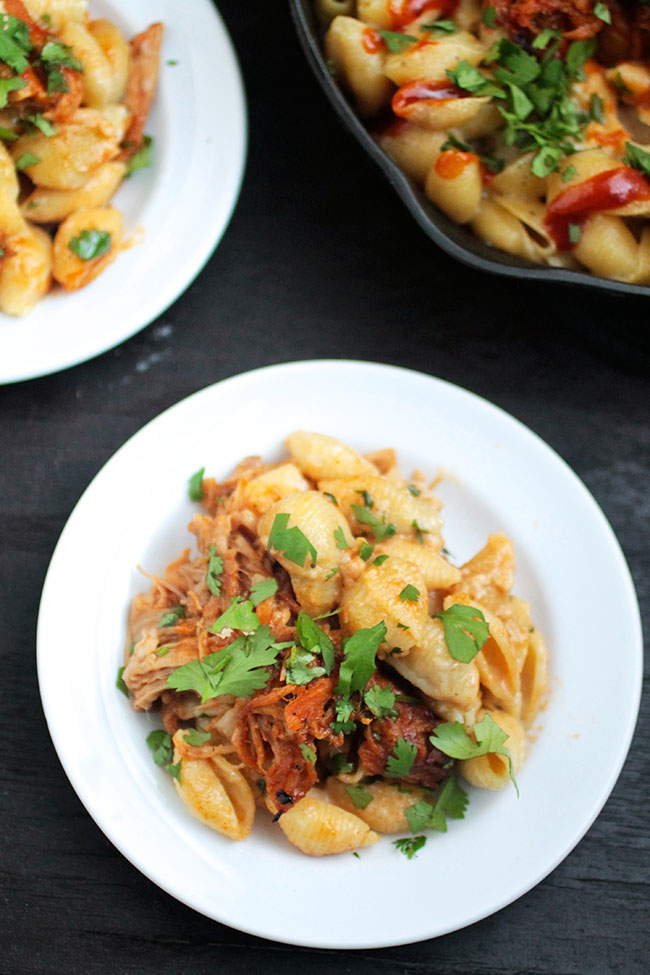 RAISE YOUR HAND IF YOU LOVE FREE STUFF.

ALSO RAISE YOUR HAND IF YOU LOVE MACARONI AND CHEESE (Me. Right here). Well, YOU, internet friends, are in all kinds of luck today – because I have some OH SO DELICIOUS mac and cheese for you AS WELL AS a super stupendous giveaway from my friends over at Saucy Mama (you remember them & their awesome mustards).

But first, this mac and cheese. (If you could care less about mac and cheese – GASP, HOW ARE WE EVEN FRIENDS – you can scroll down for the giveaway good stuff).

I made this mac and cheese as part of a promotion Saucy Mama is running – a bunch of fabulous food bloggers are cooking up original recipes with a new line of the SAUCIEST Saucy Mama sauces, and at the end of it all, a grand prize winner gets a trip to Vegas (VEGAS!) to compete in the World Food Championships with his or her saucy sauce-a-licious recipe. Can you tell I like to say “saucy” a lot? (SAUCY… SAUCY… SAUCY… Word has lost all meaning. NAME THAT TV SHOW!) But really, I think a trip to Vegas and the World Food Championships would be SO. COOL. So I was obviously determined to make this macaroni and cheese the best thing I’d ever put in my mouth. And you guys – this pasta is LIFE-CHANGING. I made it again for lunch today because I couldn’t stop thinking about it. BAH. SO GOOD. I’d been toying with the idea of pulled pork mac and cheese for awhile, and when I tasted Saucy Mama’s Honey Barbecue I knew that it and me and pork and mac and cheese were meant to be. TRUE LOVE, y’all. The Honey Barbecue goes so perfectly with a simple, sharp white cheddar cheese sauce, and the fresh cilantro adds a light pop of flavor to break up the smokiness of the pork. OH, and did I mention you make the pulled pork in a SLOW COOKER? It’s so easy! I’m in love. But you knew that already. Now for the giveaway! One lucky reader will win a set of Saucy Mama’s new wing sauces (seen below). That’d be the Honey Barbecue – which you could immediately use to make this mac and cheese – along with the Jamaican Jerk and Orange Habanero – YUMM-O. Having tasted them all myself, I can personally attest to their deliciousness. Also, you know what I love about Saucy Mama (aside from the fact that they’re in Oregon/Home Sweet Home/The best place in the universe)? You can pronounce every ingredient in their sauces. EVERY SINGLE ONE. No piles of chemicals or questionable additives, here – just real, normal, find-it-in-your-own-pantry ingredient lists. As someone who boycotts store-bought sauces on the regular because I hate eating all those yucky preservatives, I am a huge fan of Saucy Mama. THIS GIVEAWAY IS NOW CLOSED. Thank you to all who entered, and congratulations to the winner, Elizabeth! For the Pork:
For the Mac and Cheese:

For the Pork:
For the Mac and Cheese:

I like my pasta saucy, but not drowning. If you like a LOT of cheese sauce on your pasta, I suggest doubling the sauce recipe and increasing the pasta called for to 1 lb.

TIP: If a cheese sauce is ever clumpy, zap it with an immersion blender for a few seconds to turn it into a smooth sauce! Disclaimer: I received a promotional kit of Saucy Mama Sauces free of charge in exchange for my participation in this contest. All recipes, photos, thoughts, and opinions are my own.