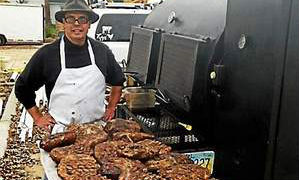 By Elizabeth Lundblad, The News-Herald

Michael Stefan’s clients probably know him more for his proficiency with a pair of scissors, but the Willoughby hairstylist holds three certifications in barbecue judging.

Stefan, who will be judging the ribs competition at Downtown Willoughby’s Red, White and BBQ Rib Burn Off on May 17, said he’s been barbecuing for 20 years but has really taken it seriously in the last eight years.

He first got started in cooking when he attended classes at the Loretta Paganini School of Cooking, 8613 Mayfield Road in Chester Township.
“I love barbecue. I love to eat,” he said. “I’ve judged at the rib burn off for the last three years.”

“I just judged the World Food Championships in Vegas in November. The contest was bacon and barbecue,” he said. “That was amazing.”
The two main ways to prepare barbecue are dry rubs, where the meat is coated in a blend of spices and herbs before cooking, and the sauce method, where the meat is continually basted with barbecue sauce while cooking.

“I like to taste the meat, so I’m a fan of the dry rubs,” Stefan said. “I don’t like to cover up the meat’s flavor, so sauce on the side is good.”
Barbecuing is s cooking technique where the food is cooked over a long period of time, he added. While having a smoker helps, barbecue fans with traditional grills can give their food the barbecue treatment at home.

“What you can do is start out on the grill and put wood chips in a foil packet,” Stefan said. “Let it go for two hours or so. Once you get the color of the meat you like, wrap it in foil to finish on the grill or finish it in the oven. Meat takes the most flavor of the smoke during the first two hours, so those are the most important.”

When not cutting hair or keeping an eye on his barbecue, Stefan keeps up his other hobby: bee keeping. The bee keeping works in tandem with the barbecue as he makes his own line of barbecue dry rubs.

All of the rubs in his line of Bee Happy BBQ Rubs feature granulated honey he’s harvested. The three flavors include Chicken Tickle, Bull Slap and Butt Rub.

Though he’s judging the rib contest at the May 17 Rib Burn Off, Stefan said he’ll be cooking up barbecued pork shoulder and chicken drumsticks.
“The restaurants do a really nice job with the ribs,” he said. “I’m hoping for good weather and a good turnout. People should bring hearty appetites because I have 700 pounds of pulled pork to do and a corn roaster with 800 ears of corn.”