BBQ Blowout barrels back into Oviedo 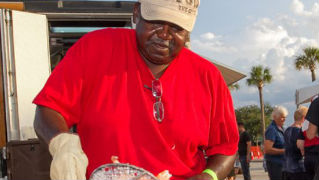 Back for another year, the Central Florida BBQ Blowout has returned to once again prove that Floridians take their pulled pork, ribs and brisket very seriously, the Seminole Chronicle reports.

Now in its second year, the blowout event will return to the Oviedo Mall this weekend and will boast one of the biggest barbecue contests in the South. With 81 teams competing across three divisions, the food will overfloweth, the chefs will be hard at work and the smell of smokers will likely permeate the air for miles.

However, there's way more to this signature event hosted by the Oviedo-Winter Springs Regional Chamber of Commerce. There will be music, fun for the kiddies and a gathering of booths and businesses from throughout the community. Not to mention, the event, which is being presented by Sonny's BBQ, will benefit a local charitable organization - Helpful Hands.

More than 20,000 attendees showed up to last year's inaugural blowout, said Bridget Lake director of sponsorship and events for the OWSRCC, and the event was named "Best New Event" by the Seminole County Convention and Visitors Bureau.

But with such a big event, barbecue fans are going to need all of the details they can get to navigate this growing Memorial Day weekend festival.

This year's BBQ Blowout will take place Friday and Saturday outside the Oviedo Mall. Friday night's festivities will begin at 6 p.m. and run until 10 p.m. The night will include live musical performances, barbecue for purchase and barbecue tours.

Saturday's festival will be a daylong event beginning at 10 a.m. and running until 6 p.m. The second day of the blowout will include rows of booths, the actual barbecue competition, food samples for the people's choice award, vendors, live music and children's activities. Visitors can park right outside the mall and follow their noses to the event, which will take place on the north side of the mall. There is no charge to attend the event on either day, but if you plan on eating, bring some cash.

"Friday has always been more of a concert type deal with plenty of food and barbecue, and then Saturday has been the full blown festival that's family-oriented with the kids area," Lake said. " ... They get to have a great community event and enjoy themselves without having to dish out too much money."

A full lineup of performers will take the stage at this year's event, including two who will kick off the blowout on Friday evening. Taking the stage first will be Dorsey "Hisself" Odell, who is actually a participant in one of the competing teams. Or as the blowout website puts it, he is a "BBQ smoker and midnight toker of the now infamous Team Unknown." Dorsey's music is a mix of Johnny Cash, Hank William, Sr. and Willie Nelson.

Following Dorsey's opening act, Bubba Wilson and the Jeff Howell Band will take over. Burt "Bubba" Wilson is locally known for his radio presence on 104.1, but will show off his musical talents Friday night. Jeff Howell brings a New Orleans feel, as Howell was born and raised in Louisiana. Howell is known for throwing "a Mardi Gras on you that you'll be feeling for a long time," his website states.

Saturday's mainstage will play host to a handful of talent. The lineup includes Bailey Callahan, Good Luck Penny, Amanda Cooksey, Swain Summer Band, The Dealers and School of Rock, who will perform in that order. Performances begin at noon and each musician will have a 45-minute set.

Barbecue is certainly the name of the game at this year's event, and it's taken very seriously, Lake said.

"These teams will spend up to $1,000 for that one weekend and it really has come to the point where these barbecue competitions are being elevated to a sport. We take it very seriously," said Angela Iversen, who organized the barbecue portion of the event. "We make sure that we have judges who take it seriously. We've got reps who take it seriously because these guys are spending quite a bit of money to do it."

Iversen, who is also a certified judge and cook, said there is so much that goes into the competitions - and the food is unlike anything you'll ever get at a restaurant.

"I will tell you that the level of barbecue is so much different than even with restaurants," Iversen said. "Restaurant food is great, don't get me wrong, but they don't have to take the care into the food as you would in competition."

"A barbecue judge has one bite to really determine how they're going to score," Iversen said. " ... So it has to be phenomenal food."

Passionate about the competition and eager to share her vast knowledge on the subject, Iversen will for the first time this year give barbecue tours. Tours will run from 7 p.m. to 9 p.m., with the first leaving at 7 p.m. and the last leaving at 9 p.m. Tours are free of charge and will explain the competitive side of barbecue while also allowing guests to have some Q&A time with the teams. The tours will each run about 20 to 30 minutes.

Although the other divisions are not competing for the golden ticket to a national competition, they are competing for bragging rights. The Backyard BBQ competition includes 14 teams of various barbecue enthusiasts who may just not be at the pro level yet, Iversen said, but they still take the competition to heart.

"Backyard is not Joe Blow bringing out his grill. It could be, but you'll see some of these backyard guys, they're trying to perfect their cook to get to the point where they're going to go professional," she said.

New this year, 104.1 and SBK from Monsters in the Morning will host an amateur contest comprised of 10 competing teams. The winner will take home a Big Green Egg cooker.

While food vendors will line the parking lot for those eager for nibbles, not all barbecue teams will be offering food samples. In fact, only nine of the competing professional teams will be vending, Iversen said.

However, a people's choice contest will take place, and for $7 visitors can sample pork from 20 different teams. Community judges will submit their favorites to the supervisor of elections who will be counting the votes. The people's choice winner will win a $300 prize.

A children's area will be set up on Saturday for the little ones to enjoy. Bounce houses, water slides, games and ice cream will be available. Parents can buy their children a $5 wristband and that includes entrance into any of the rides and activities.

If you want to go

For more information and a full list of teams, sponsors and events visitbbqblowout.com Also, be sure to stop by the Seminole Chronicle Hydration Station tent. We'll be handing out free beverages in exchange for a "like" on Facebook.

http://www.floridatoday.com/story/entertainment/dining/2014/05/22/oviedo-central-florida-bbq-blowout/9437267/
« Back to News
Search All News SEARCH