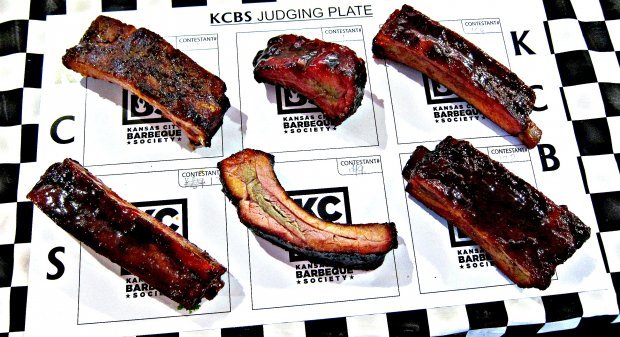 + ENLARGE
A judge's plate at the annual barbecue Olympics, Memphis in May.

The smoke just keeps on a-rolling. Earlier this year, we gave you a list of barbecue competitions across the country and around the world to help plan your vacation calendar. Since then, more and more events have been scheduled and announced, so here’s an update to ensure you’re never more than a few weeks away from getting your recommended intake of hickory in your bloodstream.

Don’t forget about the major events like Memphis in May (May 15-17), the Big Apple Block Party at Madison Square Park in New York (June 7-8), Kansas City’s American Royal BBQ Contest (September 28-October 6) and the World Food Championships in Las Vegas(November 6-9). While those are the big events, there are plenty of other interesting competitions that should draw local and regional interest.

It’s not traditional pork of beef barbecue, but the 12th annual Southern Hotwing Festival in Memphis on April 26 is kind of a big deal. Teams compete to create the perfect winglets while live music entertains the crowds all day. The Marshall Tucker Band (at least one member of which is apparently still alive) headlines the main stage.

Among the important elements of a good competitive event is a pun-like name, or at least one that rhymes, so the Jiggy with the Piggy Championship fits the bill nicely. But this event is in Kannapolis, NC, one of the hotbeds of cool smoking. With almost $40,000 in prize money at stake, this competition should attract pitmasters from far and near to show off their waresMay 9-10.

Really, what goes better than BBQ and bourbon? The answer is nothing, so it’s natural that the Bourbon City BBQ Festival in Bardstown, KY should be a must-visit competition. Bardstown is the acknowledged center of the bourbon universe and an important pit stop on the Kentucky Bourbon Trail, so expect plenty of good brown liquor and smoky goodness at this party June 6-7.

Can MySQL coders cook good barbecue? Despite the fact that it sometimes seems like you can’t smoke anywhere in California, including outdoors or in your own car, the Silicon Valley Barbecue Championships will allow software engineers and venture capitalists to show off their BBQ chops on June 27-28.

Competitive pitmasters will take over the Rose Bowl in Pasadena, CA over July 4thweekend for the American BBQ and Brews Festival. Because what’s more American than beer and barbecue?

Up in Wisconsin, the folks at Death’s Door Spirits distill some mighty fine gin from the grains of Washington Island, but they also raise some great livestock on those farms as well. Local competitive barbecue enthusiasts take advantage of that fine meat to smoke up fine ‘cue at the Death’s Door BBQ party August 22-23.

Despite all this talk about barbecue, bourbon and gin, there are also competitors who appreciate an alcohol-free event. The 10th Annual Recovery Fest will be held in Richmond, VA on September 5-6 to benefit the McShin Foundation and educate the public about National Recovery Month.

Championship teams from across the country will descend on Laughlin, NV on Halloweenfor the “Smoke on the Water” USA BBQ Championship. Vegas, Halloween and barbecue cookers? Expect craziness, especially since the champion will receive a $50,000 2015 Camaro. If he or she doesn’t cruise that bad boy right down the middle of the Strip blasting Skynyrd at full volume while wearing a pig costume, there’s not a bristle on his or her boar sack.

Finally, the fourth Saturday in October is the traditional date for the Jack Daniel’s World Championship Invitational Barbecue competition in Lynchburg, TN. Colloquially known as “The Jack,” this event attracts the cream of the crop of competitors who must have already won a state championship and still be lucky enough to have been drawn in a lottery to earn a spot in the field. The view from the top of BBQ Hill with the changing leaves of rural Tennessee and the sound of bluegrass entertaining the assembled masses of porkophiles is not to be missed!

http://www.foodrepublic.com/2014/05/01/guide-2014-barbecue-competitions-festivals-and-smo
« Back to News
Search All News SEARCH