Champion pitmasters get their due at Praise the Lard competition

Champion pitmasters get their due at Praise the Lard competition 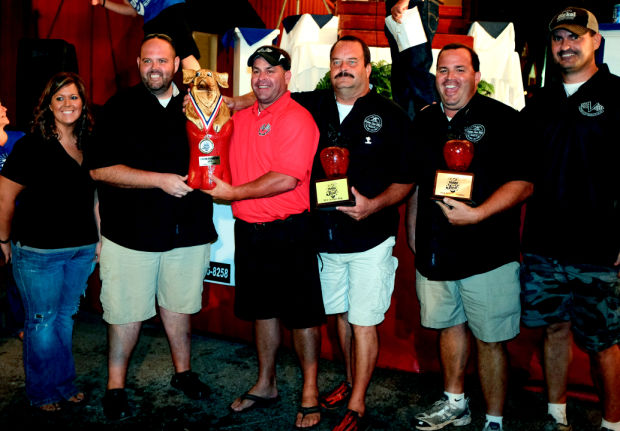 Victory Lane, of Memphis, won Memphis Barbecue Network Grand Champion and first place in the hog and shoulder categories at the 2013 Praise the Lard barbecue cookoff in Murphysboro. (Provided by Rob Burke)

MURPHYSBORO — A record 84 teams from 14 states set up camp around the 17th Street Barbecue Warehouse to compete for Grand Champion and a share of $25,000 in prize money. Judges, volunteers and ambassadors traveled from TKTK states. Named by Food & Wine magazine as one of America’s top 20 barbecue cities, Murphysboro and 17th Street Barbecue are prime barbecue destinations.

“We were thrilled to welcome people to Murphysboro and Southern Illinois,” Mike Mills, owner of 17th Street Barbecue and one of the event’s original founders, said in a news release. “The competition was as fierce as ever. This year’s Grand Champion, in addition to their share of the prize money, won entry to the World Food Championships taking place in Las Vegas in November, and is entered into the coveted Jack Daniel’s World Invitational Barbecue Cooking Contest draw.”

It also marked the sixth year of a dual-sanctioned event with teams cooking both the Memphis Barbecue Network and Kansas City Barbecue Society contests.

Of the 84 competing teams, nine were MBN sanctioned teams, 61 KCBS teams and 14 teams cooked in both categories

New to this year’s line-up, “Townsend Spice Kids’ Que” featured teams competing for Best Burger. Competitors between ages of 7 and 11 and 12 and 15 were provided with 1.5 pounds of hamburger meat, charcoal and a mini-grill. The judging was based on appearance, tenderness/texture and taste.

Here are the results from this years competition: