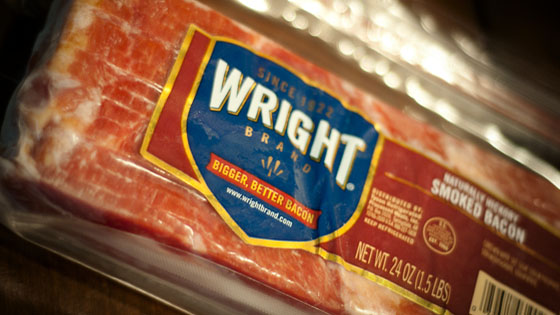 Earlier this month, Wright® Brand Bacon was selected by the prestigious World Food Championships as title sponsor for its newly created Bacon World Championship. The WFC annually brings together champions from the world’s biggest and best food competitions and online recipe contests into a single food competition. Champions from each of seven categories face off at the event before a celebrity panel for culinary fame, a $300,000 prize purse and designation as 2013 World Food Champion.

The makers of Wright® Brand Bacon kick-off the journey to the WFC with DESTINATION: BACON DOMINATION. This nationwide challenge calls for the best and most innovative bacon chefs to compete for a chance to battle in the Bacon World Championship for the title of 2013 Bacon World Champion and the 2013 World Food Champion. The event will be held in Las Vegas November 7 through 10.

The schedule of events includes festival cook-offs in four other cities around the country, each earning the winner a competitor’s slot in the Bacon World Championship. A seventh chef will be selected through a global online bacon recipe competition. Each stop also will include live music, games, prizes and tastings galore for Wright® Brand Bacon’s dedicated brigade of bacon enthusiasts.

“Bacon has joined the ranks of some of America’s most beloved icons,” said Bob Harris, senior product manager for Wright® Brand Bacon. “We’re proud to play a part in these competitors’ pursuit of bacondom’s ultimate title, and to bring the biggest, best bacon party to the hungry bacon lovers at each stop along the way.”

Please visit http://www.facebook.com/WrightBrand for the full schedule and competitor updates.