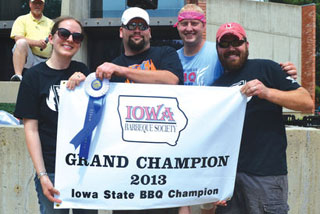 Ryan Newstrom and the Big T'z Q Cru of Ames got a taste of the Iowa State BBQ Championships overall title in 2009.

On Saturday, the team came back for a second helping.

Big T'z took home top honors and the $2,750 check at the two-day event, which wrapped up Saturday on the grounds of the Fisher Community Center.

T-R PHOTO BY ANDREW POTTER
The overall winners of the Iowa State BBQ Championships proudly display their banner. The winners were Big T’z Q Cru from Ames and included, from left, Sonya Newstrom, Jonathan Kepley, Ian Murken and Ryan Newstrom. The two-day event concluded Saturday on the grounds of the Fisher Community Center.

"It feels even better than the first win," Newstrom said.

The team also won the brisket category at the event. He said is starts with the right meat, monitoring the smoke levels and ends with their special sauce.

Ryan's wife, Sonya Newstrom, got a big kiss from her husband when they were announced as winners. Sonya already has plans for the prize money.

"It will be put right back into the barbecue," she said.

Aside from the prize money, Sonya said she loves interacting with her fellow competitors.

As a result of its overall championship, the team qualifies for the World Food Championships in Las Vegas in November.

The event was moved to the Fisher center grounds after the recent flooding at Riverview Park. Event chair Bob Wenner seemed pleased with how it went. Friday night saw plenty of local people for the bands and food and Saturday saw less foot traffic, but still was a success.