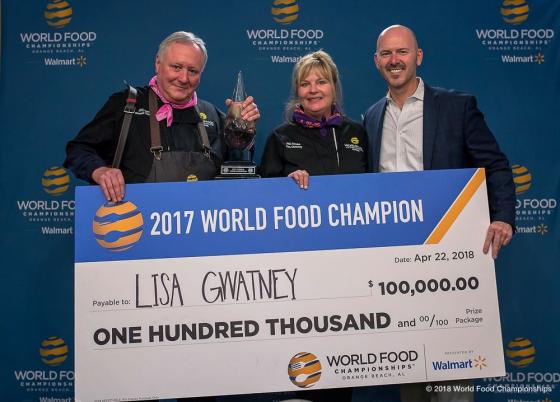 Often referred to as “The Ultimate Food Fight,” WFC’s final round of competition will occur in Bentonville, Arkansas, the home of the world’s largest retailer and WFC’s exclusive retail partner, Sam’s Club.

All ten category champions who just won their divisions in Dallas will now travel to Bentonville in mid May to compete in three more local culinary challenges to see who the next World Food Champion will be.

“We are really excited to be partnering with Sam’s Club and expanding our relationship in a way that benefits Food Champs everywhere,” said Mike McCloud, President and CEO of WFC. “Sam’s and Walmart have been great supporters of WFC over the years. And now it’s time to enter the next phase of our strategy, which will involve a lot more integrations of strategic suppliers and retail concepts that will take Food Sport to a whole new level.”

The ten category champions who will be heading to Bentonville in May are:

The event will be mostly private, as the final champs will be treated to a Sam’s Club tour, reception and “Supplier Summit” that involves a fun competition for bragging rights. The events will start on Friday, May 19th and culminate on May 21st. The WFC final challenges will occur at BRIGHTWATER, a center for the study of food.

Like previous Final Table events, the 2022 finalists will participate in an elimination process that narrows the ten Food Champs to five, then three, and ultimately one winner.  More details on the specific challenges will be revealed to the contestants during planning sessions over then next three months.

Bentonville and BRIGHTWATER are no strangers to Food Sport, as the same partners were the first to host an offsite Final Table for WFC in 2018. That was the year that Steak Champion Lisa Gawtney became the World Food Champion with her dish titled “The Last Supper,” which featured a Wagyu Ribeye Filet, grilled and seared, topped with truffle butter sauteed mushrooms, seared Fois Gras, and an Amarone reduction

Teams will be allowed to invite key family members and guests to the event, but details on how many and what times have not yet been released.

“We have a robust schedule of events that we are working through details on right now,” commented McCloud. “So as we can share public-facing moments with our fans, we will make announcements on our social platforms.”

Brightwater: A Center for the Study of Food, serves as a hub for food training, activities, events and business in Northwest Arkansas. In addition to workforce readiness in the expanding hospitality sector, the school’s goal is to explore the larger food world in theory and practice, specifically focusing on agriculture and food issues within the context of community development such as farming, health, food entrepreneurship and public education. Brightwater is one of the most well-rounded, thoughtful and innovative programs in the nation. The school’s global understanding, regional roots and community engagement make it a cultural destination for the entire food experience.

The World Food Championships (WFC) is the highest stakes food competition in the world. This multi-day, live event culinary competition showcases some of the world's best cooks who compete for food, fame and fortune in 12 categories (Bacon, Barbecue, Burger, Chef, Cocktail, Dessert, Live Fire, Rice/Noodle, Sandwich, Seafood, Soup and Vegetarian). Each year as Food Sport kicks off in January, teams have to earn their way into WFC by winning a Golden Ticket at a previous competition. Almost 40 countries and every state in America have been represented at WFC’s main event, which has awarded more than $2.5 million in cash to rising culinary talent since 2012.

WFC’s judging process requires certification in the proprietary E.A.T.™ methodology. Click here to learn more about getting certified online or in person.
« Back to News
Search All News SEARCH