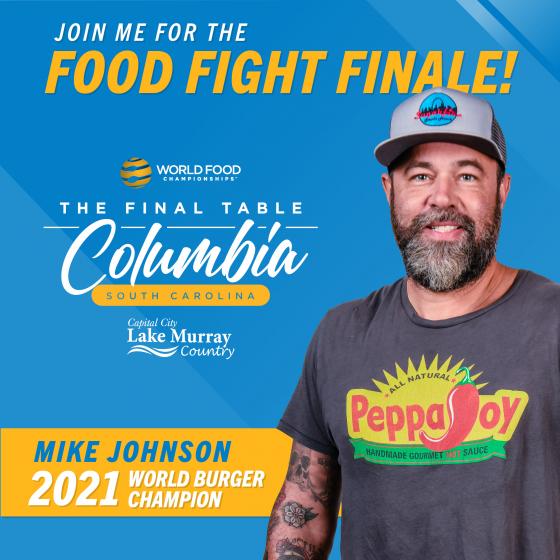 Competition cook Mike Johnson entered the World Food Championships’ (WFC) 9th Annual Main Event at its newest location of Fair Park in Dallas, Texas, as a seasoned competitor looking to land a respectable Top Ten finish in the burger category. Turns out he left Dallas with the most coveted prize of all —  $7,500 in winnings and the title of 2021 World Burger Champion, which gives her a seat at WFC’s $100,000 Final Table Challenge this April.

The Missouri cook took on a highly skilled field of competitors. During the multi-day competition, the Burger Competitors faced a three-competition challenge that allowed them to display their creativity and cooking abilities.

For the first dish, a “structured” challenge, competitors created “Impossible

The next challenge, the “signature” dish round, gave competitors the opportunity to showcase their talents with no limits. With 90 minutes on the clock, they had free rein to craft any recipe, which for Johnson was his “Classic American Diner Smashburger with A-5 Wagyu Beef.”

In the Final Round, Johnson’s goal was to best the other nine competitors who advanced to WFC’s Top Ten round, which involved an “Infusion” challenge. In this third and final round, each competitor was tasked with creating any dish they wished to make. The challenge, however, required them to incorporate  Boulevard Brewing Company’s Tank 7 American Saison Ale with an Impossible™ Burger. Johnson created a “Texas Fire Cowboy Beer Burger,” where was a  Boulevard Beer infused smash patty served in homage to Texas tradition with beer BBQ sauce, beer cheese, cowboy candy chimichurri and a fresh beer bun.

For her next challenge, Johnson will go up against the other nine category champions at WFC’s Final Table event in South Carolina’s Lake Murray Country set for April 30 - May 1, featuring three rounds of challenges inspired by local cuisine experts.