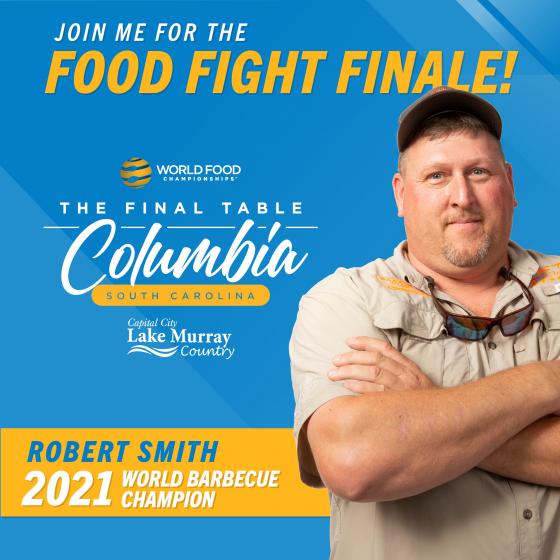 Pitmaster Robert Smith entered the World Food Championships’ (WFC) 9th Annual Main Event at its newest location of Fair Park in Dallas, Texas, looking to land a respectable Top Ten finish in the barbecue category. Turns out he left Dallas with a smokin’ prize —  $7,500 in winnings and the title of 2021 World Barbecue Champion, which gives him a seat at WFC’s $100,000 Final Table Challenge this April.

The Texas cook took on a highly skilled field of competitors, including the previous Steak Champion Ryan Murphy. During the multi-day competition, the Barbecue Competitors faced a series of culinary challenges that allowed them to display their creativity and cooking abilities.

For the Opening Round challenge, barbecue competitors had the option of competing in WFC’s E.A.T.™ Methodology Division and/or Champions Barbecue Alliance sanctioning, where they faced three to four protein challenges.

In the Final Round, Smith’s goal was to best the other nine competitors who advanced to WFC’s Top Ten “Infusion” Challenge. In this round, each competitor was tasked with creating a barbecue dish using any theme that they wanted. The challenge, however, was that they were required to incorporate La Lechonera’s Mojo Dry Rub. Smith created a “First Class Seafood Gumbo,” where he combed deep south Louisiana home cooking with Texas-style barbecue.

Smith’s barbecue gumbo not only earned him the title of World Barbecue Champion and grand prize winnings, but it propelled him into the ultimate food fight known as WFC’s Final Table Challenge.

Smith will now go up against the other nine category champions from WFC, as they all travel to South Carolina’s Lake Murray Country for a special event to determine the next World Food Champion on May 1. During this final weekend of competition, there will be three rounds of cooking inspired by local cuisine, and each round will feature eliminations as local food experts determine the winners.