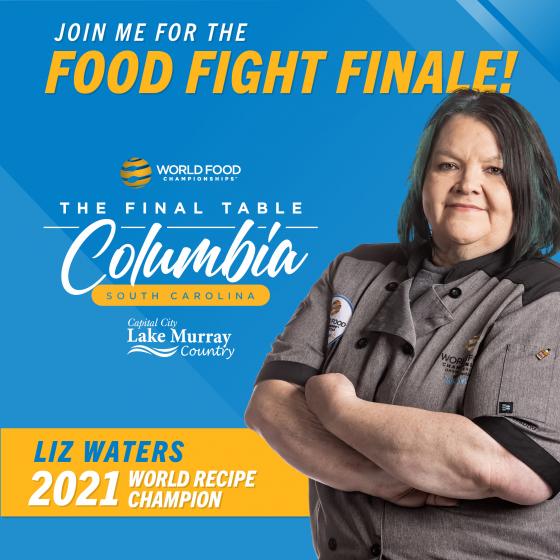 Competition cook Liz Waters entered the World Food Championships’ (WFC) 9th Annual Main Event at its newest location of Fair Park in Dallas, Texas, as a seasoned competitor looking to land a respectable Top Ten finish in the recipe category. Turns out she left Dallas with the most coveted prize of all —  $7,500 in winnings and the title of 2021 World Recipe Champion, which gives her a seat at WFC’s $100,000 Final Table Challenge this April.

The Georgia Chef took on a highly skilled field of competitors, including the previous World Food Champion Lidia Haddadian. During the multi-day competition, the Recipe Competitors faced a three-competition challenge that allowed them to display their creativity and cooking abilities.

For the first dish, a “structured” challenge, competitors created Szechuan Noodles while also including Red Gold Tomato’s Ketchup. Each team was encouraged to put their own spin on what Szechuan Noodles meant to them. The guidelines, as defined by WFC organizers, were  “bold, spicy flavored sauce that contains garlic, peppers or chilies, and Red Gold® Tomato Ketchup as the base. This sauce is tossed or served with thin noodles.” Waters served up “Southern Tantanmen'' Szechuan Noodles.

The next challenge, the “signature” dish round, gave competitors the opportunity to showcase their talents with no limits. With 90 minutes on the clock, they had free rein to craft any recipe, which for Waters was her “Orleans Forest Chateaubriand.”  She described the dish as “being served a very decadent tender beef filet mignon. It has a mild delicate beef flavor and an incredible tenderness. It is served on top of creamy garlic herb gournay cheese polenta topped with a red wine sauce. There is a beautiful mossy forest floor spinach siphon sponge cake garnished with lightly sautéed mushrooms, asparagus, microgreens and edible flowers.”

Coming out of the Opening Rounds — a combined score of the structured dish & signature dish — Waters was sitting in second place, a little over one point behind the previous champion Hadaddian, who was in first place.

In the Final Round, Waters’ goal was to best the other nine competitors who advanced to WFC’s Top Ten round, which involved an “Infusion” challenge. In this third and final round, each competitor was tasked with creating any dish they wished to make. The challenge, however, required them to incorporate Red Gold’s Diced Tomatoes. Waters created a “Spanish Bayou Shrimp and Hot Tomato Grits,” where she made a deconstructed version of gazpacho caviar using a molecular gastronomy method of transforming everything ingredients that yield a unique texture and flavor explosion.

New to WFC 2021, organizers enhanced the competition by adding an X-Factor component, which rewards competitors with extra points based on their Top Ten’s level of difficulty. Waters’ X-Factor of making the gazpacho caviar received a score of 2.75 out of a possible score of 3.

It worked. Because Water’s overall score of 94.3 out of 100 allowed her to jump Haddadian and all other teams to claim her first World Recipe Championship win.

For her next challenge, Waters will go up against the other nine category champions at WFC’s Final Table event in South Carolina’s Lake Murray Country set for April 30 - May 1, featuring three rounds of challenges inspired by local cuisine experts.