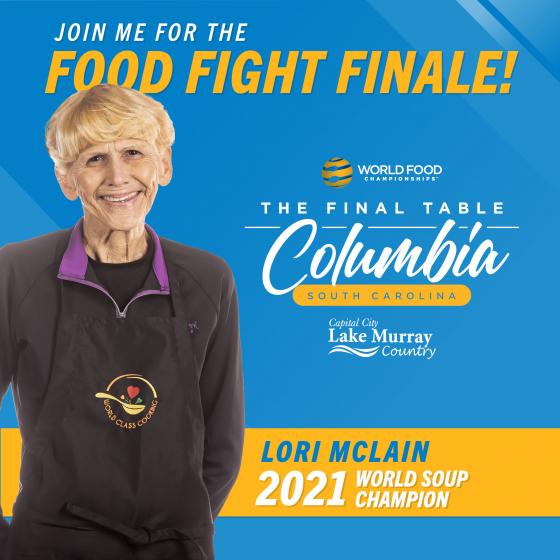 Home Cook Lori McLain was one of 67 Texans who convened at Fair Park in Dallas for the 9th Annual World Food Championships looking to land a respectable Top Ten finish among the competition’s ten categories. The seasoned competitor scooped up the most coveted prize of all –– $7,500 in winnings and the title of 2021 World Soup Champion, which gives her a seat at WFC’s $100,000 Final Table Challenge this April.

The Denton cook took on a highly skilled field of competitors, including the previous Soup Champion Rocky Jullianelle. During the multi-day competition, the Soup Competitors faced a series of culinary challenges. They were tasked with creating Chowder, impressing the judges with their signature soup and incorporating the category sponsor (Texas-based Bolner’s Fiesta Brand) in their third and final “infusion” dish.

For the Structured Dish Challenge, soup competitors created Chowder. Each team was encouraged to be creative and put their own spin on what Chowder meant to them while also incorporating Bolner’s Fiesta Brand turmeric and Borden Dairy Heavy Whipping Cream. The guidelines, as defined by WFC organizers, were "a thick soup or stew that may contain but is not limited to, salt pork or bacon, vegetables, onions, potatoes and additional seasonings. Chowder may contain shellfish, fish, or any protein or combination that the competitor chooses.” McLain served up a Smoked Sausage Green Chile Corn Chowder with Corn Fritters.

The next challenge, WFC’s Signature Dish round, gives competitors the opportunity to showcase their talents with no limits. With 90 minutes on the clock, they have free rein to craft any soup, which for McLain was her “Bacon-Cheeseburger Soup.” She says the dish is “inspired by backyard cookout favorites: bacon cheeseburgers and loaded potatoes. This soup gives you a favorite burger in a comforting bowl! For extra fun, I served it with fried pickle chips.”

Coming out of the Opening Rounds — a combined score of the Structured Dish & Signature Dish — McLain was sitting in eighth place, with previous champion Jullianelle about one point ahead of her.

In the Final Round, McLain’s goal was to best the other nine competitors who advanced to WFC’s Top Ten “Infusion” Challenge. In this third and final round, each competitor was tasked with creating any soup they wished to make. The challenge, however, required them to incorporate Bolner’s Fiesta Brand Vanilla Bean. McLain created a “Vanilla Ale Spicy Pork Soup with Cornbread Pinwheel Twist,” where she used the technique of pressure cooking the pork in the microwave, using a microwave pressure cooker. She said, “it combines traditional pressure cooking methods with efficient microwave cooking, ensuring even heat distribution, improved food color, and faster cooking time.”

New to WFC 2021, organizers enhanced the competition by adding an X-Factor component, which rewards competitors with extra points based on their Top Ten’s level of difficulty. McLain’s X-Factor using a microwave pressure cooking technique received a score of 3 out of a possible score of 3.

It worked. Because McLain’s overall score of 92 out of 100 allowed her to jump Jullianelle and all other teams to claim her first World Seafood Championship win.

For her next challenge, McLain will go up against the other nine category champions at WFC’s Final Table event in South Carolina’s Lake Murray Country set for April 30 - May 1, featuring three rounds of challenges inspired by local cuisine experts.