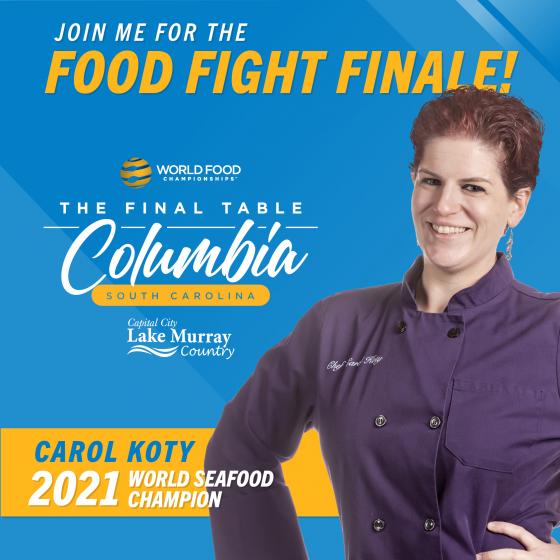 Professional Chef Carol Koty entered the World Food Championships’ (WFC) 9th Annual Main Event at its newest location of Fair Park in Dallas, Texas, as a seasoned competitor looking to land a respectable Top Ten finish in the seafood category. Turns out she reeled in the most coveted prize of all —  $7,500 in winnings and the title of 2021 World Seafood Champion, which gives her a seat at WFC’s $100,000 Final Table Challenge this April.

The Connecticut Chef took on a highly skilled field of competitors, including the previous Seafood Champion Josh Cooper. During the multi-day competition, the Seafood Competitors faced a series of culinary challenges. They were tasked with creating Fish Tacos, impressing the judges with their signature seafood dish and incorporating Rozie’s Relsa, in their third and final “infusion” dish.

For the Structured Dish Challenge, seafood competitors created Fish Tacos. Each team was encouraged to be creative and put their own spin on what Fish Tacos meant to them. The guidelines, as defined by WFC organizers, were "grilled, pan-fried or deep- fried fish that is served on small hand-sized corn or flour tortillas.” Koty served up a Beer Battered Catfish Taco with Sangria Onions and Bourbon Bacon Jam.

The next challenge, WFC’s Signature Dish round, gives competitors the opportunity to showcase their talents with no limits. With 90 minutes on the clock, they have free rein to craft any seafood recipe, which for Koty was her “Caprese Scallop Pinwheel, Lobster Orzo, Pom-Balsamic Glaze.”  She described the dish as “the flavors of a classic caprese salad celebrated in a stuffed sea scallop pinwheel, wrapped with prosciutto and served over a bed of lobster orzo pilaf that’s infused with sweet and spicy peppers, finished with indulgent truffled parmesan spinach and bright citrus pomegranate balsamic glaze.”

Coming out of the Opening Rounds — a combined score of the Structured Dish & Signature Dish — Koty was sitting in fourth place, about 3 points behind the previous champion Cooper who was in first place.

In the Final Round, Koty’s goal was to best the other nine competitors who advanced to WFC’s Top Ten “Infusion” Challenge. In this third and final round, each competitor was tasked with creating any seafood dish they wished to make. The challenge, however, required them to incorporate Rozie’s Mild Relsa. Koty created a “Sea Bass, Handmade Fettuccini & Italian Shrimp Sausage,” where she made the pasta and shrimp sausage both from scratch within the 90-minute timeframe.

New to WFC 2021, organizers enhanced the competition by adding an X-Factor component, which rewards competitors with extra points based on their Top Ten’s level of difficulty. Koty’s X-Factor of making homemade pasta and sausage received a score of 3 out of a possible score of 3.

It worked. Because Koty’s overall score of 97.5 out of 100 allowed her to jump Cooper and all other teams to claim her first World Seafood Championship win.

For her next challenge, Koty will go up against the other nine category champions at WFC’s Final Table event in South Carolina’s Lake Murray Country set for April 30 - May 1, featuring three rounds of challenges inspired by local cuisine experts.