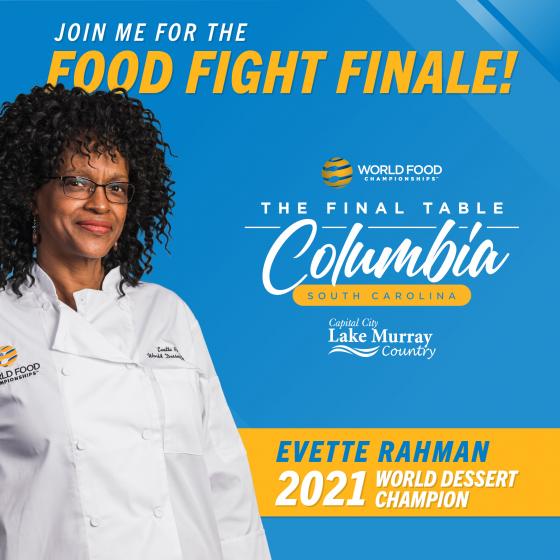 Professional Baker Evette Rahman entered the World Food Championships’ (WFC) 9th Annual Main Event at its newest location of Fair Park in Dallas, Texas, with a “BIG” target on her back as she prepared to defend her reigning World Dessert Champion title. Not only did she succeed in being crowned a consecutive-year champion, but she has broken records being named the only competitor to ever become a three-time Category Champion.

In Food Sport, a competitor winning a category title more than once is a rare occurrence. In fact, only a few cooks in the competition’s nine-year history have been able to accomplish a repeat. But by earning a three-peat champion title, Rahman has more than proved that she knows what a sweet victory tastes like.

The Orlando-based bakeshop (Sister Honey’s) owner tackled a series of challenges at WFC 2021, where she not only was crowned the Dessert Champion, but also took home $7,500 and earned a seat at WFC’s $100,0000 Final Table Challenge. During these challenges, she was tasked to decorate an elaborate holiday-themed cake, whip up her best signature dish and create her final dish in an infusion round.

For the “Decorated Holiday Cake” challenge, the Dessert Competitors had the option to choose any holiday theme to decorate their cakes (which were provided by Weston Foods). “This is the category that I knew would be a must-see,” commented Mike McCloud, President and CEO of WFC. “Imagine towers of extravagant, detailed layers of cake being carried by two or three people to the turn-in table. Now imagine the judges’ faces as these cakes entered the room. All anyone could say was WOW.”

Rahman chose to represent Valentine’s Day as her holiday-themed decorated cake and titled her masterpiece – Sweet Surrender Valentine’s Cake –– which was a luxurious cake frosted with strawberry infused buttercream and a fresh strawberry topping garnished with strawberries, gold leaf and rose petals “to add a romantic ambiance,” according to Rahman.

WFC’s Signature Dish Challenge gives competitors the opportunity to showcase their talents. With 90 minutes on the clock, they have free reign to craft any Dessert dish. Rahman entered her Endless Summer Orange Creamsicle Pie, which is reminiscent of those refreshing pops from the ice cream truck in the peak of summer heat. She takes the sweet and tart Orange Creamsicle Pie to the next level with a fluffy cream cheese base filling in a graham cracker crust and mandarin orange topping garnished with wedges and mint. An added duo of orange and vanilla whipped cream makes it a “dessert to remember.”

At the end of the Opening Rounds (Decorated Holiday Cake & Signature Dish), Rahman was leading the charts with a 96.25 score, which was almost a three-point lead over the Dessert field. Rahman advanced to the Final Round with nine other competitors as they all faced off in WFC’s Top Ten Infusion Challenge. Each competitor was tasked to create any dessert with the required infusion ingredient –– stevia. Rahman created a Pyure Blueberry Blast Pie, which she stated “because this dessert was created with Pyure Organic Stevia, you're allowed to have your pie and eat it too!” The pie’s fluffy cream cheese layers encased with a blueberry filling “is guaranteed to chase the blues away.”

New to WFC 2021, organizers enhanced the competition by adding an X-Factor component, which rewards competitors with extra points based on their Top Ten’s level of difficulty. Rahman’s X-Factor “the technique of layering the fillings creates not only a luxurious look, but also a balanced taste” received a score of 2.50 out of a possible score of 3.

With an overall score of 95.23 out of 100, Rahman took home her third World Dessert Championship win.

For her next challenge, Rahman will go up against the other nine category champions at WFC’s Final Table event in South Carolina’s Lake Murray Country set for April 28 - May 1, featuring three rounds of challenges inspired by local cuisine experts.

The World Food Championships (WFC) is the highest stakes food competition in the world. This multi-day, live event culinary competition showcases some of the world's best cooks who compete for food, fame and fortune in 10 categories (Bacon, Barbecue, Burger, Dessert, Rice/Noodles, Sandwich, Seafood, Soup, Steak and Vegetarian). In 2021, more than 300 culinary teams from 5 countries and 40 American states competed in WFC’s Main Event. The Champions of each category will now face their next challenge called The Final Table, which will be held at South Carolina's Lake Murray Country in late April (Click here to request an invitation to the event). While contestants have to earn their way into WFC by winning a Golden Ticket at a previous competition, potential judges are welcome to take WFC’s online certification course that explains the E.A.T. methodology. Certified judges then request and receive available seats at the next scheduled WFC event. Click here to learn more about getting certified.
« Back to News
Search All News SEARCH